Ranji Trophy 2017-18: Mumbai are on the back foot in their landmark match.

At Mumbai: Things aren’t looking very pleasant for the home team in their 500th Ranji match. After bundling out for 176 in front of Baroda’s pace, visitors have added more to their miseries. At stumps on Day Two, Baroda is 376 for 4 and lead by 205 runs. Aditya Waghmode’s 134 propelled Baroda ahead in the race, whereas fifties from Vishnu Solanki, Swapnil Singh and skipper Deepak Hooda have led to Baroda’s total dominance. Hosts had to run through their opposition in order to stand a chance, but have been kept at bay.

From hereon, Baroda will look to mount a big score and push for an innings-victory in Mumbai’s landmark match.

At Cuttack: After Murali Vijay s 140, Baba Aparajith and Vijay Shankar boosted Tamil Nadu s innings with their centuries in the middle on Day 2 of Round 5 of Ranji Trophy 2017-18.

In a bid to get a couple of early wickets, Tamil Nadu declared their innings in the final hour of the third session at 530 for 8. Suryakant Pradhan was the pick of bowlers with figures of 3 for 75. Biplab Samantray and skipper Govinda Poddar shared 4 wickets. In response, Odisha went on to rule the final 13 overs of the day without any discomfort adding 36 on board for the loss of no wicket, trailing 494 runs.

At Agartala: To their overnight score of 252, Andhra managed to add just 150 runs, being bundled for 402. In response, the Andhra bowlers earned an early wicket, keeping Tripura at bay. 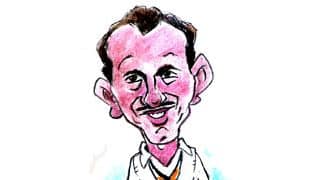