In their 500th Ranji Trophy match, Mumbai slumped to 171 all-out thanks to Atit Sheth and Lukman Meriwala's 5-wicket hauls.

In their 500th Ranji Trophy match, Mumbai slumped to 171 all-out thanks to Atit Sheth and Lukman Meriwala’s 5-wicket hauls. After putting Mumbai to bat first, Sheth dismissed the in-form Prithvi Shaw for a duck on his birthday. In his very next over, Sheth got the better of Ajinkya Rahane. Mumbai lost 2 wickets for 5 runs. Captain Aditya Tare provided resistance, but he kept on losing partners. Shreyas started off well, but Meriwala broke Mumbai’s brief momentum with disciplined bowling. Tare, too, joined his teammates soon in the pavilion, scoring a gritty half-century. Baroda replied well, ending day’s play at 63 for 1. At the crease are Aditya Waghmode (15) and Vishnu Solanki (32).

Opener Prasanth Kumar came up with an excellent performance as it was his unbeaten 120 that kept Andhra Pradesh on top against Tripura in Group C on Day One of Round Five of the Ranji Trophy 2017-18 at the Maharaja Bir Bikram College Stadium in Agartala on Thursday. Having won the toss and electing to field first, Tripura could not do much with the ball as they could manage just a couple of wickets in the entire day, while Andhra batsmen, especially Prashant, and Hanuma Vihari did most of the hard work with the bat. Andhra just lost a wicket in the pre-lunch session, followed by another in the post-lunch session, while they finished at 252 for the loss of two wickets at stumps on Day One.

Indian opener Murali Vijay continued his splendid run in the format as he struck a brilliant 140 to keep Tamil Nadu on top against Odisha in Group C on Day One of Round Five of the Ranji Trophy 2017-18 at the DRIEMS Ground in Cuttack on Thursday. Having won the toss and opting to bat, TN were initially off to a shaky start. However, it was Vijay, along with N Jagadeesan, who steadied the ship for their side, while the Odisha bowlers could only claim three wickets. TN lost a wicket in each session, but finished the day on strong at 292 for the loss of three wickets. 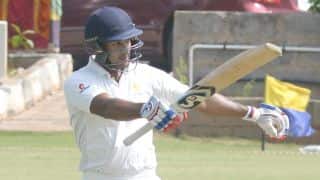