At Ranchi: Jharkhand needed a spirited effort to bail themselves out against Gujarat. Trailing by 63 runs and 8 wickets in hand, they added only 77 runs on the final day. Chintan Gaja’s early strikes pushed Jharkhand on the back foot, while Hardik Patel’s 4-wicket haul rocked the lower order. Only Virat Singh managed a half-century, while Ishan Kishan was dismissed for 33.

At Lahli: Kerala picked up bonus points courtesy an innings victory over Haryana. Resuming at 83 for 5, Haryana were bundled out for 173. There was no fight whatsoever from Amit Mishra’s side as Jalaj Saxena’s regular breakthroughs dented their progress. Saxena was adjudged Man of the Match for his 4-wicket haul and 91.

Basil Thampi and MD Nidheesh shared 5 wickets to compliment Saxena. Only Mishra and Poonish Mehta showed some resistance to avoid the inevitable.

At Jaipur: Rajasthan had an outside chance to settle for a draw against Saurashtra, and they delivered. Trailing by 246 runs with all wickets in hand, their openers led the way with a 205-run stand. Amitkumar Gautam and Chetan Bist slammed hundreds and laid a good platform.

They added runs at a brisk rate; not adhering to defensive tactics. Rajesh Bishnoi carried the momentum forward after a mini-collapse and remained unbeaten on 103 to take them to safe shores. From Saurashtra, Dharmendrasinh Jadeja was most successful with 5 for 167.

Saurashtra walked away with 3 points and were eliminated. Kerala’s innings win and Gujarat s comprehensive performance against Jharkhand have ensured them to quarter-final spots from Group B. 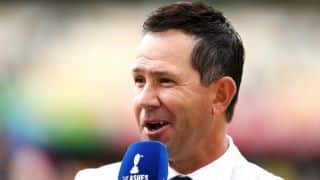 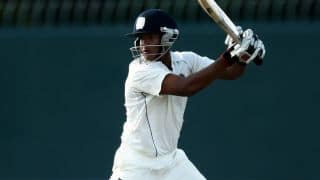