Railways captain Mahesh Rawat's scored a brilliant century that was crucial in securing his team a vital first-innings lead over Chhattisgarh after a top-order collapse.

Railways captain Mahesh Rawat’s scored a brilliant century that was crucial in securing his team a vital first-innings lead over Chhattisgarh after a top-order collapse. Thanks to Rawat’s 110, Pratham Singh’s 66 and Harsh Tyagi’s 55, Railways made 330 to take 30-run lead on Day 3 of their Ranji Trophy 2018-19, Elite A, Round 3 match in Raipur.

Karan Thakur then removed both the Chhattisgarh openers for ducks with the visitors finishing the day at 1/2, still trailing by 29 runs.

After they had resumed on their overnight total of 132/4, right-arm pacer Pankaj Rao removed Pratham for 66. Thereafter, Tyagi joined his captain to steer the innings forward. Their century-stand gave Railways innings stability. Rawat scored his 13th first-class century and it was Rao who ended his knock on 110 to break the partnership.

With the wicket of Avinash Yadav, Rao completed his five-wicket haul and from 267/5, Railways were reduced to 276/8 inside eight overs. It was Rao’s fourth fifer in the format.

With the batsmen departing in quick succession, Tyagi held nerves and remained determined to hand his team the lead, stitching vital stands with the lower order. First, with Manjeet Singh (26), he took his team into the lead and was the last wicket to fall, becoming Sumit Ruikar’s second victim of the innings. By the time he was dismissed, Railways had secured a slim but important lead. 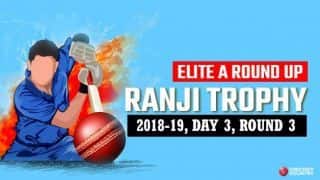