This four-day contest was not about who wins or loses. It was more about who gets outbatted.

This four-day contest was not about who wins or loses. It was more about who gets outbatted. And it was Baroda who won the contest on that front by scoring 533/9 on Day in reply to Saurashtra’s 521 in first innings.

On the fourth and final day of their Ranji Trophy 2018-19, Elite A, Round 4 fixture in Rajkot, Baroda’s innings was powered by opener and captain Kedar Devdhar’s 224 and Vishnu Solanki’s 116 as they has secured a 12-run lead before the match ended in a drab draw. However, that was enough for the visitors to claim three points on the basis of first-innings lead.

The duo of Devdhar and Solanki resumed the innings and batted without much fuss. Devdhar went on to scored his highest first-class total before being dismissed by Dharmendrasinh Jadeja. He faced 336 deliveries during his marathon knock and struck 29 fours and three sixes. His stand with Solanki for the second wicket was worth 233 runs.

Solanki recorded his fourth first-class century and was out for 116 after consuming 308 deliveries. He struck six fours and a six, scoring at a strike-rate of 37.66.

But their dream ended with the pair of Atit Sheth and Bhargav Bhatt building a century stand for the ninth wicket. Shethe remained unbeaten on 55 while Bhatt was run out for 44. With Baroda already in the lead, the two teams agreed to shake hands and the match ending in a draw. 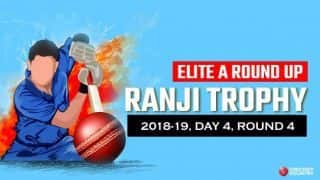 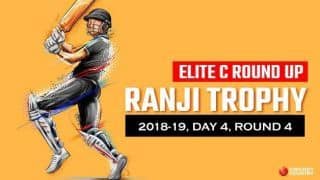