A maiden first-class century from opener Kathan Patel and an unbeaten half-century from Dhruv Raval kept Gujarat's innings from unravelling.

A maiden first-class century from opener Kathan Patel and an unbeaten half-century from Dhruv Raval kept Gujarat’s innings from unravelling against defending champions Vidarbha in Nagpur on Saturday.

At the close of play on Day 1, the visitors had reached a decent 263/6 thanks to Kathan’s 105 and Dhruv’s unbeaten 69 in their Elite A round 7 clash of Ranji Trophy at : Vidarbha Cricket Association Ground.

Gujarat had opted to bat first but lost captain Priyank Panchal in the very first over of the innings. Bhargav Merai departed soon with the scorecard reading 16/2.

Kathan and Rujul Bhatt dropped anchor to gain control of the proceedings. Together they added 97 runs for the third wicket to lead Gujarat’s recovery.

Rujul had done well to reach 32 with the help of a four and a six when Akshay Wakhare pinned him in front. Manprit Juneja (1) lasted seven deliveries before falling to Aditya Sarwate.

Gujarat had been jolted again by twin blows and again, Kathan played an important role in helping them see off the troubled phase. This time, he found an able partner in Dhruv who has so far struck eight fours in his 124-ball essay.

Axar Patel departed cheaply on 13 but Karan Patel did well to consume 55 deliveries and score 27 off them, giving company to Dhruv when the stumps were drawn. 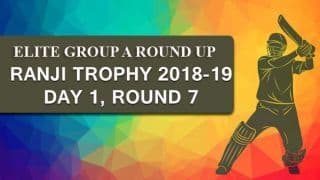 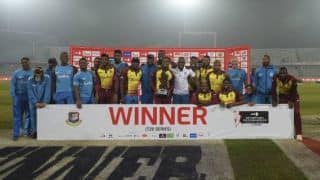