On the day he was recalled to India s T20I squad, Kedar Jadhav scored a brisk century to steer Maharashtra towards safety on day three of their seventh round Elite Group A 2018-19 Ranji Trophy match versus Chhattisgarh.

Chhattisgarh had a third centurion in Ashutosh Singh, who moved from an overnight 75 to 114 as the home team made 462, thus claiming a lead of 223 over Maharashtra. Ajay Mandal added 29 runs before he was out for 135, and Anupam Sanklecha kept chipping away to finish with 5/89.

Facing a big deficit, Maharashtra lost two early wickets to Omkar Verma, but regrouped through Jadhav who at stumps had hit 15 fours and a six in his 14th first-class match. Jadhav, batting on 103 off 114 balls, put on 93 for the third wicket with RD Gaikwad, and with him at stumps was Ankit Bawne on 10. 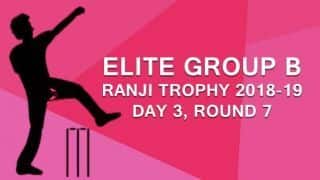