Railways ended day three at Shimoga on 41/1 - still 318 runs away from victory.

Railways have a tough final day ahead of them after Karnataka set them a target of 362 and by stumps had prized out a wicket on day three of their round seven Elite Group A 2018-19 Ranji Trophy fixture at Shimoga.

The day began with Karnataka 41 for no loss and ended with Railways 41/1 – still 318 runs away from victory.

Devdutt Padikkal, the 18-year-old rookie, made 75 off 159 balls in an opening stand of 150 with Dega Nischal who scored his third first-class hundred in his tenth match (101 off 232 balls). Krishnamurthy Siddharth breezed to an unbeaten 84 from 86 balls before Manish Pandey declared Karnataka’s second innings at 290/2.

Prasidh Krishna removed Prashant Gupta for 4 in his opening over, leaving Saurabh Wakaskar (20*) and Nitin Bhille (16*) with plenty to do. 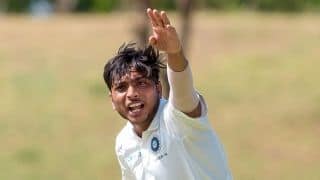