Prashant Chopra registered his eighth first-class century to drive Himachal Pradesh to 231/4 against Hyderabad on the opening day of their Round 4 Elite B Ranji Trophy 2018-19 match on Wednesday.

Opting to bat at the Rajiv Gandhi International Stadium in Hyderabad, Himachal were off to a good start with openers Chopra and Priyanshu Khanduri stitching 178 runs.

Ankush Bains and Nikhil Gangta were off colour and added just 13 and 21 respectively. Bains was caught behind off Mehdi Hasan, while Gangta was castled by Ravi Teja. 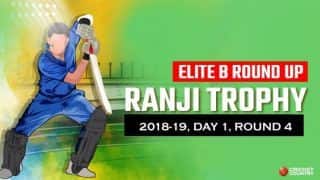