M Mohammed ran through Andhra top-order as the hosts were left struggling despite a middle-order recovery on Day 1 of their 2018-19 Ranji Trophy 2018-19, Elite B, Round 3 match against Tamil Nadu. At stumps on Tuesday at the CSR Sharma College Ground in Ongole, Andhra were 198/8 in 79 overs.

After Thangarasu Natarajan got rid of Prasanth Kumar in the fifth over, Mohammed struck thrice to leave them reeling at 68/4. His scalps included Ashwin Hebbar (12), Ricky Bhui (22) and captain Bodapati Sumanth (1).

Jyothi Sai Krishna and Girinath Reddy got together to arrest the slide. Together they took the score past the 100-run mark while stonewalling the charging TN bowlers. Their 73-run stand took Andhra to 141/5 before Mohammed broke the association by having Krishna caught for 58. He struck eight fours before departing.

That wicket triggered another collapse as Andhra lost four wickets in for the addition of just 55 runs. Siva Charan Singh and KV Sasikanth failed to open their accounts, Shoaib Khan added 26.

Reddy continued to resist, finishing the day unbeaten on 69 off 149 and has so far struck five fours and two sixes.

Mohammed was pick of the Andhra bowlers with figures of 4/60 while Natarajan and Kishore picked up two wickets each. 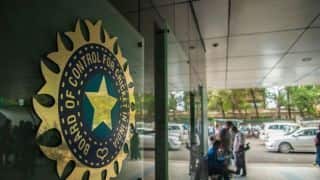