Punjab crushed Delhi by 10 wickets for their first win of the season in a one-sided encounter of the 2018-19 Ranji Trophy.

Punjab crushed Delhi by 10 wickets for their first win of the season in a one-sided encounter of the 2018-19 Ranji Trophy at the Feroz Shah Kotla stadium on Friday. On Day 3 of their Elite B, Round 4 fixture, Delhi were bowled out for 179 in their second innings, thus setting the visitors a target of five runs.

Punjab openers Jiwanjot Singh and Abhishek Sharma overhauled the target in 2.1 overs as Punjab made 8/0 for an outright win.

Delhi, who were gasping at 106 for six in their second innings and trailing Punjab by 69 runs at stumps on day two, fared a tad better in their second dig thanks to a decent partnership between Pulkit Narang (31) and Pulkit Sood (25).

While Punjab have revived their Ranji campaign after having collected just two points from the previous two games with a dominating show, Delhi continue to slip. This was Delhi’s first Ranji defeat at home in five years and also their first loss of the ongoing season.

Delhi’s sorry show with the bat continued, suffering collapses across the two innings. They were skittled for 107 on the first day with Punjab pacer Siddharth Kaul calling the shots and were staring at another poor show before a 53-run stand between Narang and Sood for the eighth wicket saved them the blushes. However, the no support from the specialists, they managed a meagre lead of four runs which was never going to be enough. While pacers ruled the roost on the first day, it was the turn of spinners to take the centrestage on the penultimate day as the pair of Vinay Chaudhary (4/39) and Mayank Markande (3/30) shared seven wickets between them. 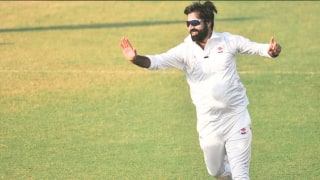