Hyderabad openers stitched a century stand to give their team a strong start against Punjab but failed to build on the platform, slipping to 240/7

Hyderabad openers stitched a century stand to give their team a strong start against Punjab but failed to build on the platform, slipping to 240/7 at the close of play on Day 1 of their Ranji Trophy Elite B round 7 clash.

Captain Akshath Reddy and Tanmay Agarwal added 125 runs for the first wicket with each hitting a half-century. Reddy scored 77 off 127 with nine fours and a six before Sanvir Singh dismissed him, giving Punjab their first breakthrough.

Reddy’s decision to bat first Rajiv Gandhi International Stadium in Hyderabad proved right but three quick strikes threatened to negate the advantage. Pacer Siddarth Kaul struck with the scalps of Rohit Rayudu (2) and Tanmay (60) to reduce the hosts to 156/3.

Himalay Agarwal and Bavanaka Sandeep began the repair work, seeing off the nervy phase. They built a 62-run partnership for the fourth wicket which Mayank Markande broke with the dismissal of Sandeep for 30.

From 218/2, Hyderabad went on to lose their next five wickets for the addition of just 21 runs with Markande inflicting the majority of the damage to finish the day with 3/65.

Hyderabad will bank on Himalay who struck an unbeaten half-century and was batting on 51 off 120 to help them post a strong first-innings total. 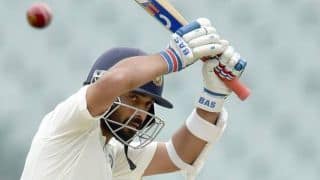