Captain Manoj Tiwary fell short of his century by 10 runs on the opening day of Bengal's Elite B, round 7 clash of Ranji Trophy against Andhra.

Captain Manoj Tiwary fell short of his century by 10 runs on the opening day of Bengal‘s Elite B, round 7 clash of Ranji Trophy against Andhra at the ACA-VDCA Cricket Stadium in Visakhapatnam. At the close of play, Bengal were 194/6 thanks to Tiwary who led their recovery, hitting 90 off 164.

Following their dismissal, Tiwary took control and steered the innings forward, finding good support in Agniv Pan. They added 113 runs for the fourth wicket to resurrect the innings. Prithviraj provied the breakthrough for Andhra when he had Agniv caught for 39.

Tiwary struck 14 fours during his stay before Paidikalva Vijaykumar’s only victim of the day. Shahbaz Ahmed (11) fell 10 overs before the stumps were drawn.

Bengal’s hopes of a good total hinge on Writtick Chatterjee (27*) and their lower order.

For the hosts Sasikanth and Prithviraj took two wickets each while Vijaykumar and Shoaib claimed a wicket apiece. 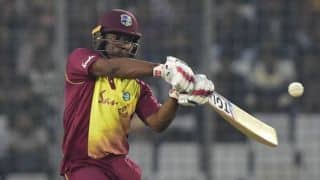