Left-arm spinner Vikas Mishra yet again tormented Madhya Pradesh batsmen with a six-wicket haul as Delhi thumped the visitors by nine wickets for their first victory of the ongoing Ranji Trophy season on Monday.

The 25-year-old Mishra, who had taken six wickets in the first innings as well, finished with career-best match figures of 12 for 71 to help Delhi bundle out Madhya Pradesh for just 157 runs in 64.3 overs on the third day of their Elite Group B fixture.

The hosts needed to score just 29 runs without losing wicket to claim the win with a bonus point but lost opener Kunal Chandela (6) two runs short of the target to settle for six points.

Hiten Dalal (15) and Dhruv Shorey completed the win in 6.4 overs. Delhi will next take on Bengal in an away match from December 30.

The visitors resumed at seven for none and their inexperienced openers — Aryaman Birla (32) and Anand Bais (46) — put up a fighting 83-run stand but once left-arm pacer Kulwant Khejroliya snared the former, it opened the floodgates.

Rajat Patidar (21), captain Naman Ojha (22) and Yash Dubey (15) got starts but the kind of fight MP needed was nowhere to be seen or rather the wily Mishra made the rival batsmen dance to his tunes.

After dismissing Ojha and Dubey, Mishra trampled the lower-order along with spin colleague Shivam, who claimed the last wicket in Avesh Khan (6). 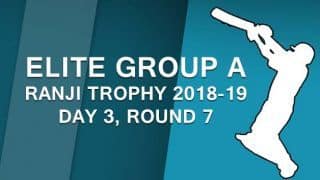