Odisha got their first win of the season by beating hosts Assam by nine wickets in Guwahati.

Odisha have claimed six points from their Group C match of the 2018-19 Ranji Trophy in Guwahati after beating hosts Assam by nine wickets on Thursday.

Starring was Rajesh Mohanty who took 6/55 to make it 11 wickets in the match, which set Odisha a target of 12 runs. They lost Anurag Sarangi for 5 as they knocked off the target in 3.3 overs.

Solanki s three wickets had reduced Assam to 60/4 by stumps on Wednesday, which left them 35 runs behind of Odisha. Only Sibsankar Roy managed a fifty, with Mohanty dismissing skipper Amit Sinha, Ranjeet Mali and Rahul Singh to bowl Assam out for 132 in 50 overs. 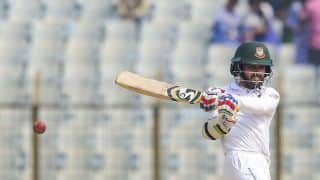