Jaggi was solid in his unbeaten 76 off 176, his innings decorated with eight boundaries.

Ishank Jaggi remained unbeaten on 76 as Jharkhand closed day 1 of their Elite C Round 6 Ranji Trophy 2018-19 match against Uttar Pradesh at 278/6 on Friday.

Put into bat at the recently rechristened Bharat Ratna Shri Atal Bihari Vajpayee Ekana Cricket Stadium in Lucknow, the home team struck first blood with Yash Dayal removing Mohammad Nazim for a duck after he was caught by Suresh Raina. Kumar Deobrat and Utkarsh Singh then steadied the innings with a 47-run partnership.

The partnership was broken after Utkarsh was dismissed for 13 off 51 by Dhruv Pratap Singh, who saw the back of Saurabh Tiwary (8) in the next over.

Captain Ishan Kishan and Jaggi then combined for a 82-run partnership. Kishan brought up his half-century but was immediately cleaned up by Dhruv. He added 54 off 42, an innings laced with 10 boundaries for his cracking knock.

Jaggi was solid in his unbeaten 76 off 176, his innings decorated with eight boundaries. Jaggi had Shahbaz Nadeem at the other end batting on 70, as the duo were involved in an unbeaten 121 run partnership for the seventh wicket.

For Uttar Pradesh, Dhruv snapped four wickets in his 18 overs going for 76 runs. 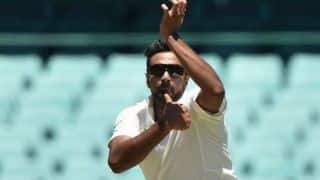