Allrounder Irfan Pathan was the star with the ball for Jammu and Kashmir as he recorded a five-wicket haul to bowl out Haryana for 91.

Allrounder Irfan Pathan was the star with the ball for Jammu and Kashmir as he recorded a five-wicket haul to bowl out Haryana for 91 in chase of 222 on Day 3 of their Ranji Trophy 2018-19, Elite C, Round 6 clash in Rohtak.

Pathan finished with figures of 5/18 while Umar Nazir chipped in with 3/29 as J&K won by 130 runs – their second win of the ongoing season.

Resuming on their overnight total of 49/4, Haryana could add just one more run to their total before Irfan completed his fifer with the scalp of Pramod Chandila for 2. Mohammed Mudhasir then cleaned up their captain Harshal Patel for 1 in the following over.

Rahul Dagar and Yuzvendra Chahal delayed the inevitable for 10 more overs before both walked back in the space of eight deliveries with Haryana’s total stationary at 75.

Nazir removed the the final two wickets inside three deliveries as the hosts second innings came to an end in 33.3 overs with J&K claiming six points from their crushing victory at the Chaudhry Bansi Lal Cricket Stadium.

This was Haryana’s third defeat in six matches so far this season. 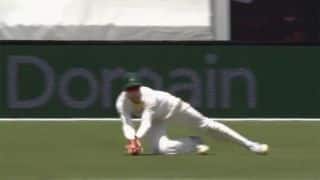 Was Virat Kohli out? Outrage on Twitter after India captain’s contentious dismissal