A roundup of all the action of Round 1 from Elite Group A of the Ranji Trophy 2018-19 season.

In a complete show of dominance, a 100-run partnership for the second wicket between Priyank Panchal and Bhargav Merai was enough to chase down the 168-run target as Gujarat registered a crushing nine-wicket win over Baroda at Vadodara on Sunday. Resuming their overnight second innings score at 161 for 7, Baroda could only manage to add 18 runs to their total and were bowled out for 179 with left-arm pacer Roosh Kalaria walking away with career-best figures of 6/35. In reply, Gujarat lost opener Samit Gohil for 22 after he was run out by Swapnil Singh. However, Panchal and Merai cruised to the finish line. Panchal registered his 16th first-class century, an innings laced with 14 boundaries and two sixes, while Merai was unbeaten on 33. Gujarat walked six points with the victory.

At the Maharashtra Cricket Association Stadium in Pune, defending champions Vidarbha ended their last day at 501/8 against Maharashtra, an improved performance from their first innings after they were bowled out and asked to follow on. Resuming their overnight score at 287 for 3, Vidarbha skipper Faiz Fazal’s fine innings was brought to an end by Samad Fallah. Fazal departed for 131 off 324. However, Vidarbha had another centurion in their ranks in Akshay Wadkar, who brought up his second first-class century. Wadkar stitched a 113-run partnership for the sixth wicket with Aditya Sarvate (60) as Vidarbha ended the day at 501/8. Wadkar, who was unbeaten on 122, smashed 17 boundaries en route to his 272-ball knock. For Maharashtra, left-arm spinner Satyajeet Bachhav added three scalps to his earlier three in the first innings to emerge as the pick of the bowlers.

At the Karnail Singh Stadium in New Delhi, Mumbai walked away with three points by virtue of gaining a vital first-innings lead as their match against Railways ended in a draw. Resuming their overnight score of 57 for 2, Mumbai lost Akhil Herwadkar early in the day for 24 off Anureet Singh. Surykumar Yadav didn’t add much to score after he was caught by Arindam Ghosh off Harsh Tyagi for just 19. However, the major positive for Mumbai was former skipper Aditya Tare, who reached his eighth first-class century in 187 deliveries. Tare, who smashed 11 boundaries and two sixes, was unbeaten on 100 when stumps were drawn on the final day. Siddhesh Lad, who missed out on a century by one run in the first dig, scored 76 before he was cleaned up by Tyagi, who returned with 3/86 for Railways.

At the SCA Stadium in Rajkot, Saurashtra pocketed three points in their kitty after gaining a first-innings lead as their match against Chhatisgarh ended in a draw. Resuming on their overnight score of 315 for 8, trailing Saurashtra (475) by 160 runs, courtesy Jaydev Unadkat’s seven wickets, Chhatisgarh could only add 40 runs, with fast bowler Shaurya Sanandia snapping both the wickets of Pankaj Rao (26) and Sumit Ruikar (67). Saurashtra suffered a top order collapse with off-spinner Sahil Gupta accounting for all the four batsmen. Saurashtra were 124/4, and were helped to 179/5 in their second dig at stumps, with Sheldon Jackson, who scored 147 in the first dig, unbeaten on 53. Gupta snapped four for 69 for Chhatisgarh. 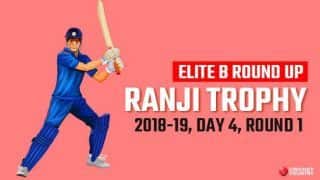