Uttar Pradesh recorded a come-from-behind six-wicket win against Jammu and Kashmir to maintain their unbeaten run in the ongoing Ranji Trophy season, recording their third win on Saturday. After conceding a big first innings lead of 101, Saurabh Kumar (5/28) and Yash Dayal (4/26) shot J& down for 111, limiting their lead to just 213 runs.

Resuming on their overnight score of 97/7, J&K lost last three wickets in Dayal’s successive overs while managing to add just 14 runs to set a target of 214 runs.

While Waseem Raza gave his team an early breakthrough to break a steady start, UP put up a much improved batting display to not let the chase go off track.

Captain Parvez Rasool picked up two wickets in the space of three runs to leave UP at 82/3 before Suresh Raina made sure there was no late drama. He scored an unbeaten 66 runs while building two important partnerships.

The first with captain Akshdeep Nath (22) was worth 54 runs for the fourth wicket and then an unbroken 82 run stand with Rinku Singh (42) as the visitors overhauled the target to end on 218/4. Raina struck eight fours and a six during his knock. 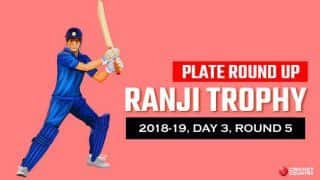