Uttar Pradesh thumped Tripura by an innings and 384 to record their fourth victory of the ongoing Ranji Trophy 2018-19 season.

Uttar Pradesh thumped Tripura by an innings and 384 to record their fourth victory of the ongoing Ranji Trophy 2018-19 season.

On Day 2 of their Group C, round 7 clash the AB Vajpayee International Cricket Stadium in Lucknow, they shot out Tripura for a mere 60 in the second innings after having bowled them for 108 earlier in the day.

Riding on double-century from Priyam Garg and twin centuries from Rinku Singh and captain Akshdeep Nath, the hosts had declared their first innings at a mammoth 552/7 in 149 overs.

In reply, the visitors were reduced to 33/4 at the close of play on Day 2. Upon resumption on Monday, captain Smit Patel and Nirupam Sen tried resurrecting the innings, adding 63 runs for the fifth wicket. The stand was broken when Nirupam Sen was pinned in front by Zeeshan Ansari for 20. Smit (47) departed soon with the scorecard staying stationary on 95.

Ansari added two more scalps to his kitty, ending with figures of 3/33 as Tripura were forced to follow-on, trailing UP by 444 runs.

Their batsmen fared poorer in the second dig with the nine of them recording scores in single-digit. Imtiaz Ahmed blew away their top-order getting rid of Rajesh Banik (4) , Nirupam Sen (2) and Bishal Ghosh (4) inside eight overs. Ankit Rajpoot took over, dealing with the rest as he finished with career-best figures of 6/25.

Only Rana Dutta offered some solace with four fours in an unbeaten 29-ball 22 with the hosts winning inside two days. 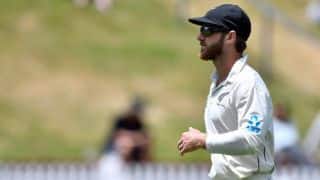