A round-up of the Plate Group matches on day two of the 2018-19 Ranji Trophy.

A round-up of the Plate Group matches on day two of the 2018-19 Ranji Trophy. Recap day one here.

Debutants Uttarakhand needed less than two days to win their maiden first-class match, crushing Bihar by ten wickets on Friday in Dehradun. The spade work had been done on the first morning when Deepak Dhapola claimed 6/13 to bowl out Bihar for 60, and starting day two with a lead of 141, the hosts were bowled for 227.

But another good effort in the field saw Bihar all out for 169 in 50.5 overs, which left Uttarakhand four runs to chase. Karanveer Kaushal needed one ball to complete a huge win.

Uttarakhand added 26 runs to their overnight total with Ashutosh Aman finishing with 4/34 in his 21 overs. As on day one, Bihar’s batsmen struggled to stitch together partnerships as Sunny Kashyap made life miserable with four early wickets inside 14 overs. The tail-end pair of Samar Quadri (36) and Anunay Singh (35) put on 55 for the tenth wicket before Dhapola got them both to finish with 3/48.

At the Nagaland Cricket Stadium in Soviam, hosts Nagaland were in sight of a big win over Mizoram when play on day two ended. Resuming on 189/4 with a lead of 83, Nagaland lost skipper Rongsen Jonathan for the addition of just two runs to his overnight 70, but stormed to 530/8 after a monumental 200 not out from 215 balls by Abrar Kazi, the former Karnataka spinner, and fifties to Mughavi Wotsa (58) and Imliwati Lemtur (50).

Kazi surpassed his previous best of 117 not out to reach his double-century as Nagaland added 341 runs in good time, the declaration coming after he reached the landmark. In ten overs before stumps, Kazi and Pawan Suyal grabbed a wicket each to leave Mizoram 16/2, behind by 408 runs.

By stumps at the MCA Cricket Ground in Shillong, Arunachal Pradesh held a lead of 129 over hosts Meghalaya with four wickets in hand. A recovery from 14/3 to 104/6 came thanks to Kshitiz Sharma who made 41 and an unbeaten 22 from skipper Kamsha Yangfo.

Meghalaya began the day on 87/6, trailing by 79 runs, and extended their first innings to 141 with the captain Jason Lamare top-scoring with 70 and Aditya Singhania the only other batsman to get into double-figure with 32 off 36 balls. Licha Tehi, Subhash Sharma and Sandeep Thakur each took three wickets.

Arunachal were rocked by Abhay Negi and Lakhan Singh who left them three down in five overs, before Kshitiz and Yangfo resisted.

In Kolkata, Sikkim were all over Manipur after bowling them out for 79 and having them follow-on. The former Delhi cricketer Milind Kumar extended his overnight 202 to 261 before he was last man out at 372, and then it took 28 overs to bowl out Manipur cheaply.

It was a sorry innings, with two wickets falling in Ishwar Chaudhary’s opening over and only former Services batsman Yashpal Singh (29) and Priyojit Singh (30) managing double-figure scores. Chaudhary took 4/37 and former Haryana and Punjab spinner Bipul Sharma 3/17. Tellingly, there were six ducks in Manipur’s innings.

Forced to follow-on, they did better in getting to stumps at 123/2 with Lakhan Arjun Rawat 62 and Yashpal 48 but trail by 170 runs. 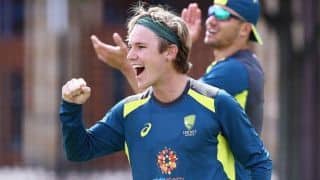