Sikkim are just two wickets away from securing victory against Mizoram

Sikkim are just two wickets away from securing victory against Mizoram with Taruwar Kohli waging a lone battle, hitting a fighting century on the third day of their Ranji Trophy 2018-19, Plate, Round 6 clash.

At the Jorhat DSA Stadium, Mizoram had reached 162/8 with Kohli unbeaten on 105 and his team still needing 179 runs more to secure an unlikely win on the fourth and final day.

Resuming on their overnight total of 75/3, Sikkim were bowled out for 169 and thus setting a target of 342 runs to win for their opponents.

An all-round Kohli had taken five-wicket haul to ensure Sikkim did not run away with a mammoth lead. He added three more scalps to his overnight tally of two wickets and finished with 5/39.

Sikkim’s second innings was hurtling towards a low total before Bipul Sharma struck a brisk half-century, hitting 65 off 72 to to help them to a sizeable lead.

Mizoram’s second essay wasn’t any better than their first as they kept losing wickets in quick intervals. The openers departed inside five overs with the scorecard reading 9/2.

By the time 23 overs were bowled, they had lost half their side for just 49 runs.

Ishwar Chaudhary continued his superb performance from the first innings, as he was once again the wrecker-in-chief taking four wickets to reduce Mizoram to 67/7.

The end was near but Kohli didn’t give up. He struck 13 fours to score an unbeaten 105 off 178 and finally found a somewhat reliable partner in G Lalbiakvela. Together, they took the score to 126 runs through a partnership worth 59 runs. Bipul Sharma broke their resistance when he had Lalbiakvela lbw for 13.

At the close of play, Kohli had found some support in HM Ralte who struck three fours to move to 13 off 33. 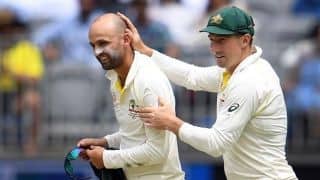