With four out of four wins – three with bonus points – Uttarakhand have steamrolled oppositions so far in the Ranji Trophy 2018-19 Plate group and sit pretty at the top of the table with a whopping 27 points.

Bihar made it to the Vijay Hazare Trophy 2018-19 quarter-final from the group consisting new entrants, and going by that, they were the top team heading in to the Ranji season. However, Uttarakhand, who finished second in the group in the Vijay Hazare – losing only to Bihar – and thus missing out on the knockouts, made a grand statement by brushing aside the team in their opening Ranji Trophy encounter by 10 wickets.

“I knew these guys are much more talented and skillful than other teams in the group,” Uttarakhand skipper Rajat Bhatia tells CricketCountry.com on his team’s performance. “When we were playing one-dayers, you could make out the talent we have. Other teams were good, but as compared to them we had better talent.”

That loss to Bihar, in their opening game, was sort of a reality check for Bhatia. That was the first time Uttarakhand played as a team and the former Delhi player concedes that he had little know-how about his team.

“That first game we lost against them, before that we were not able to play a single practice game on turf wicket,” reveals Bhatia. “We were not sure about the guys and where will they bat. We were asking them which order do you bat, we were asking bowlers whether they are comfortable bowling with the new ball or first change.

“But, that loss gave me an idea about what I should be doing in the remaining matches. We had small team meeting and told them not to worry about this loss. We took it in the stride and asked them to express themselves going forward, and they did exactly that.”

Uttarakhand went on to win their remaining Vijay Hazare matches, including scoring 366/2 vs Sikkim with opener Karanveer Kaushal smashing the only double century in the tournament’s history.

And, heading into the Ranji season, Bhatia had a clear plan.

“Right from the start of Ranji season I wanted to play on tracks with enough grass,” he says, adding, “our strength is fast bowling, and in the first game we knew Bihar’s strength were their spinners and if we have good fast bowlers, we should be playing to our strengths and luckily, we got that kind of track and everything turned our way.”

In the next two games, their away fixtures, it was the batsmen who came to the fore, but for Bhatia the best thing to come out of the two away wins was that fact that the players, most of whom have never played cricket outside of Dehradun, managed to learn and adapted to the conditions well.

“These guys have never played outside of Dehradun, and when they came out of their comfort zones they were very much surprised to see the difference in wickets outside of their home base, but it was a learning process for these guys.

“In both the matches we got placid wickets, but our fast bowlers did really well.  It was a learning process for them to know which line to bowl on different wickets and the guys who learned quickly took the advantage and adapted to the conditions really fast,” said Bhatia.

While bowlers ruled the roost in the first two games, it was the batsmen who took over the reins in the away wins. 21-year-old Saurabh Rawat scored 220 while 23-year-old Vaibhav Bhatt scored 152* against Sikkim. Bhatia contributed with 121.

However, the veteran of 108 first class games, is not swept away by his team’s stellar show so far. He asserts that cricket at this level will only get tougher and the key thing for the team to learn to be consistent and capitalise on the good form they currently are enjoying.

“It is just a the start for their careers,” said Bhatia. “First class cricket will get difficult. When you have quality teams with quality pacers and quality spinners, they will be tested – here they are scoring runs, but they should not get complacent. I want them to know that every match will not be be like this, and every attack will not be like this. It is a learning process for them and even if they are getting runs or wickets, they should be thinking of remaining consistent,” he said.

Bhatia hopes this bunch of players turn in to match-winners and when they reach the quarter-finals, if they do, play with confidence and at certain level that nobody tells them that this team came from the Plate group.

“I need them to be match winners, and I need these guys, who are performing exceptionally well, to look different (class apart). Yes, 200 is not something easy to get but, even then if they are getting it, this means they are learning well.

“I am not looking at the points tally. When we finish the league matches, we should dominate the group and then in the quarters, if we reach there, they should be full of confidence. They should not look like someone coming from the plate group,” adds Bhatia.

In Round 5, Uttarakhand are back at home and will play Mizoram, who are languishing at the bottom of the table. 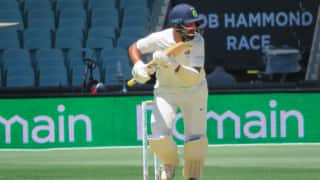 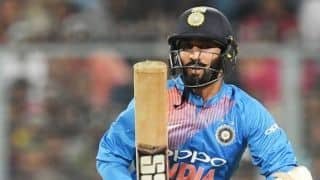