Taruwar Kohli once again stood out for Mizoram with a 100 off 181 balls, taking his team to 219

Taruwar Kohli once again stood out for Mizoram with a 100 off 181 balls at the DSA Stadium, Jorhat on day one of Round 3 of Ranji Trophy 2018-19, but Mizoram slumped to 219 all out after being a healthy 189/3 vs Manipur. ALSO READ: Rajat Bhatia leads Uttarakhand’s recovery against Sikkim

However, Mizoram bowlers started well reducing Manipur to 54/3 at stumps on day one with Varte Kima claiming 2/20 in his seven and HM Ralte taking 1/21 in his five. Upside for Manipur is that their two best batsmen are in the middle with skipper Yashpal Singh unbeaten on 15 and P Prafullomani not out on 9. Manipur trail Mizoram by 165 runs. ALSO READ: Yogesh Nagar’s 166 leads Meghalaya to 338/5 against Nagaland

After being out in to bat, Mizoram lost opener Hruaizela early for 16 to Bishworjit. However, opener Akhil Rajput and Kohli put on 124 runs for the second wicket with Rajput scoring 61 off 127. He was scalped by Th Kishan. But, Mizoram failed to build on the start as they lost their next eight wicket for just 48 runs.

Kohli fought a lone battle and notched up his century before being dismissed by Bishworjit. Mizoram were all out for 219 with Bishworjit returning 3/50 for Manipur. Priyojit K claimed 2/23, William picked 2/41 while skipper Yashpal and Kishan took one wicket each.

In reply, Manipur lost three wickets for just 30 runs with Mizoram’s Varte Kima removing Lakhan Arjun Rawat for 0 and Priyojit for 14. Ralte accounted for Bonny Chinggangbam for 10. At stumps Yashpal and Prafullomani took Manipur to 54/3. 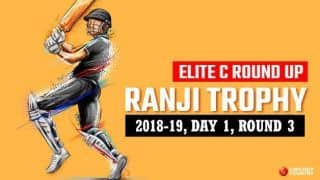