Manipur started their fifth game of Ranji Trophy 2018-19 season strongly, bundling out Nagaland for 126 on the opening day of round five

Manipur started their fifth game of Ranji Trophy 2018-19 season strongly, bundling out Nagaland for 126 on the opening day of round five of the tournament at Nagaland Cricket Stadium, Sovima on Thursday.

Manipur, who are seventh on the points table, opted to bowl first and managed to reduce Nagaland to 15/4 with pacers Kabrambam Meitei and Thokchom Singh claimed two wickets between them in the first eight overs of the match.

Skipper Rongsen Jonathan and Abrar Kazi scored 24 and 16 before Jonathan and Kazi were sent packing by pacer Priyojit Singh. Paras Sehrawat then added an unbeaten 27 and with the help of Tahmeed Rahman (20) took Nagaland past the 100-run mark. Thokcham returned to remove Rahman while Meitei and Priyojit added the scalps of Jalal uddin and Pawan Suyal, respectively, to help Manipur bundle out Nagaland for 126.

In reply, Manipur lost opener Prafullomani Singh off the first ball to Suyal but Lakhan Arjun Rawat and debutant Mayank Raghav added 68 run for the first wicket, before Rawat was trapped in front by Kazi for 14. Raghav then got together with his skipper Yashpal to add 73 runs for the third wicket.

Yashpal, however, fell for 35 to Rahman after Manipur had taken the lead. At stumps on day one, Raghav scored his maiden ton and was unbeaten on 109 off 133 balls. He has Priyojit Singh for company on 10. Services 184-all out after Prabhudessai’s maiden fifer 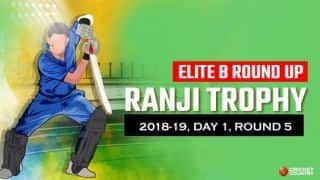