Sandeep Warrier was the pick of the Kerala bowlers with 5/83 in his 27.2 overs.

Kerala s hopes for a huge target bank on well-settled batsman Mohammed Azharuddeen, unbeaten on 76 in their second dig, as the visiting side ended day two at 127/3, ahead by 31 runs in their Ranji Trophy 2018-19 Round 8 Elite B match against Punjab on Monday.

Resuming their first innings after bowling out Kerala for a meagre 121 thanks to Siddharth Kaul, at 135/2, Punjab folded for 217. Captain Mandeep Singh top scored with 89 off 182 deliveries his knock studded with six boundaries and one six. Jiwanjot Singh was the next highest run-scorer with 69. Sandeep Warrier was the pick of the Kerala bowlers with 5/83 in his 27.2 overs.

In reply after conceding a first-innings lead, Kerala were on the backfoot losing opener KB Arun Karthick for a duck to Manpreet Singh Grewal. Rahul P was dismissed by Mayank Markande for 28. However, Azharuddeen stood firm to reach his fifty and was unbeaten on 76 off 122 his innings decorated with six boundaries and two hits over the fence. Captain Sachin Baby was not out on 16. 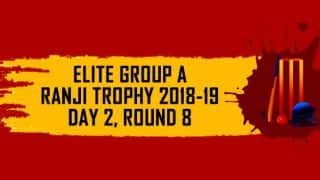