Captain Ashutosh Aman put up an all-round show as Bihar defeated Mizoram by an innings and 216 runs.

Captain Ashutosh Aman put up an all-round show as Bihar defeated Mizoram by an innings and 216 runs in their Ranji Trophy, round eight clash in Jorhat Stadium on Tuesday.

Aman had struck a century to lead a brilliant recovery in the first innings. He then claimed a wicket as Mizoram were bowled out for 77 in replay to Bihar’s 440/9d.

Following-on, Mizoram managed to cross the 100-run mark in their second dig thanks to a 52-run stand between Taruwar Kohli and Sinan Abdul Khadir for the sixth wicket after resuming the day at 80/5.

Aman broke the partnership when he pinned Kadir for 15. Mizoram went on to lose their last four wickets for the addition of just 15 runs with Aman claiming 5/28 including the scalp of Kohli for 76. Samar Quadri claimed 4/50 as Mizoram folded for 147 in 62.2 overs.

This was Bihar’s fifth straight win while Mizoram endured their sixth defeat of the season. 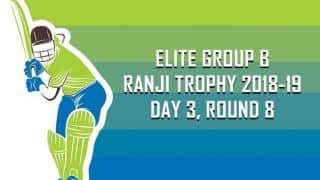