Rajasthan finish the group stages with 51 points from 9 matches, while Tripura occupy the penultimate position above Goa in the 10-team group.

Rajasthan, the only team from Elite C to have sealed qualification berth for the knockout stages before Round 9, sealed their passage after thrashing Tripura by an innings and 77 runs in just the second day of their Ranji Trophy 2018-19 Round 9 Elite C match at Agartala on Tuesday.

Resuming their second dig at 4/0, behind by 179 runs, Tripura fell like nine pins with as many as five batsmen failing to trouble the scorers. Smit Patel, who was injured in the first innings, failed to take to field, leaving Tripura without their captain and opener.

ALSO READ: Rajasthan skittle Tripura for 35, their lowest total ever

Rajasthan, who skittled Tripura for 35 in the first innings their lowest total ever hardly broke a sweat to cruise to victory. Medium pacer Deepak Chahar was the pick of the bowlers with five for 17 in his eight overs to add to the one wicket he picked in the first essay. Seamer Aniket Choudhary, the architect of Tripura s downfall in the first innings, who pocketed five wickets, and Tanveer-ul-Haq, added two each to sum up a dominating win for Rajasthan, who finish the group stages with 51 points from 9 matches.

For Tripura, Harmeet Singh top scored with 29 off 34 in an otherwise embarrassing finish for the home side, who finish at the penultimate position above Goa in the 10-team group.

From this year, five teams from combined A and B Elite Groups, two teams from Group C and one team from Plate group will go to the last eight of India s premier domestic tournament. The quarter-finals begin on January 15. 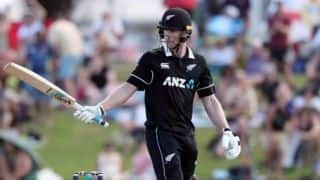