Round 9 of the Ranji Trophy 2018-19 match between Himachal Pradesh and Kerala is set up for a thrilling final day after Himachal finished day three on 285/8, taking a lead of 296 runs at Atal Bihari Vajpayee Stadium, Nadaun on Wednesday.

Round 9 of the Ranji Trophy 2018-19 match between Himachal Pradesh and Kerala is set up for a thrilling final day after Himachal finished day three on 285/8, taking a lead of 296 runs at Atal Bihari Vajpayee Stadium, Nadaun on Wednesday.

As of now no team from Group B has qualified for the knockouts and Himachal and Kerala are in the fray alongside Bengal and Punjab. After taking a slender lead of 11 runs over Kerala, Himachal now need to win over Kerala to secure their place in the knockouts. And for that they have one whole day, but need to take the gamble of setting a target that Kerala, if they bat well, can achieve.

Kerala who started the day at 219/5, failed to take the first innings lead losing their last four wickets for just 20 runs. After being 146/5, Sanju Samson (50) and opener Poonam Rahul (127) had steadied the ship for Kerala, but Samson s wicket taken by Arpit Guleria triggered a collapse that saw Guleria sending back Vinoop Manoharan and MD Nidheesh while Rishi Dhawan accounted for Rahul and Sandeep Warrier. Kerala were all out for 286, in chase of Himachal s first innings scored of 297 runs.

In reply, Himachal batted with intent in their second dig with Ankush Bains scoring 21 off 20, skipper Prashant Chopra making 41 off 60, Ankit Kalsi scoring 64 off 96, Dhawan blasting 85 off 96. But a steady fall of wickets meant Himachal couldn t really control the game finishing the day at 285/8.

Himachal, looking for an outright win must declare as soon as possible, at the peril of handing Kerala a chance at overhauling the target. If Kerala chased down whatever Himachal post, they will move to 26 points and their qualification will depend on run-rate. If they chase down the target with all 10 wickets in hand and take a bonus point, they will qualify.

Himachal will need to bowl out Kerala and take six points to qualify. But both their qualifications will also depend on how Bengal-Punjab match pans out. Punjab have the first innings lead but they need seven points to qualify, and six points to be in similar situation as Kerala. Bengal, who have 22 points need an outright win to qualify.

If both games ends in a draw, no team from Group B will qualify for the knockouts. 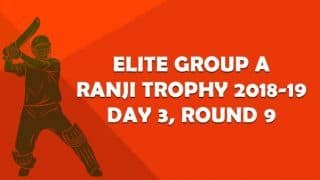 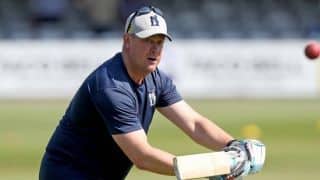