The possibility of a result ended when Bengal decided to bat a second time on the fourth day despite a lead of 475 runs.

Bengaluru: The Bengal cricket team has reached the semifinals of the ongoing 2020-21 Ranji Trophy on the basis of the first-innings lead against Jharkhand. Their quarterfinal match ended in a draw on Friday which took Bengal to the last four of the tournament.

The possibility of a result ended when Bengal decided to bat a second time on the fourth day despite a lead of 475 runs. The play ended early on the final day when Bengal were 318 for 7 in their second innings and both teams decided to shake hands.

Manoj Tiwary’s innings of 136 on the inconsequential fifth day was a big positive for Bengal ahead of their semifinal. Tiwary, who is also a minister in the West Bengal government, had also scored 73 in the first innings. Apart from him, there were valuable contributions from other Bengal batters such as Shahbaz Ahmed (46), Anustup Majumdar (38) and Abhishek Porel (34).

On the other hand, Shahbaz Nadeem (175 for 2 and 59 for 5) was the lone bright spot in Jharkhand’s bowling across two innings. And with the bat, Virat Singh’s was a one-man show as he hit an unbeaten 113 the only time Jharkhand batted.

Jharkhand were bowled out for 298, with Shahbaz Ahmed and Sayan Mondal picking up four wickets each. Shahbaz Ahmed also hit 78 in Bengal’s first innings as Bengal declared after posting a mammoth total of 773 for 7 on Day 3 and keeping Jharkhand on the field for nearly 219 overs.

Bengal had also produced a rare moment of statistical quirk on the third day after each of their top-nine batters (everyone who walked out to bat) went past 50 — with Player of the Match Sudip Gharami top-scoring with 186, and Majumdar hitting 117.

Bengal will now play Madhya Pradesh in the semifinal while Mumbai and Uttar Pradesh face off in the other semifinal. Both matches will start in Bengaluru on June 14. 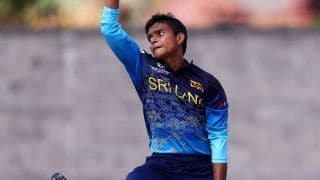