Rajasthan are all set to retain the Ranji Trophy after ensuring a huge lead against hosts Tamil Nadu at stumps, on the fourth day of the final. 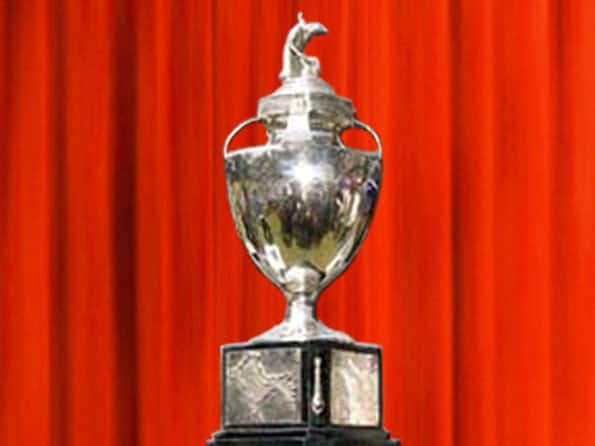 Rajasthan will lift the Ranji Trophy for the second consecutive year

Rajasthan are all set to retain the Ranji Trophy after ensuring a huge lead against hosts Tamil Nadu at stumps, on the fourth day of the final.

Dinesh Karthik’s valiant effort wasn’t matched by other Tamil Nadu batsmen as the hosts were all-out for 295 thereby conceding a lead of 326 runs.

The defending champions didn’t enforce follow-on and were 21 for no loss at stumps with their lead swelling to 347.

The final day’s play has now been rendered inconsequential as the match as a contest is already over.

Kudos to Hrishikesh Kanitkar who has now successfully lead the team to successive national titles. It’s a story that will be discussed in the cricketing fraternity for years to come.

The team may not consist of best of talents but they have a dedicated bunch of cricketers who have made all the pundits who had termed their last season’s triumph as fluke, eat a humble pie.

Tamil Nadu players on the otherhand would certainly feel that they have lost their best chance to win the trophy.

Especially, when they arguably had the best yop-order line-up in domestic cricket. When it mattered the likes of Murali Vijay, Abhinav Mukund and S Badrinath failed to deliver.

It was always a difficult task for the hosts to come back from 66 for three but Karthik tried his best to delay the inevitable. In fact, he has now scored a century in two Ranji finals and yet ended on a losing side. Karthik who faced 280 balls hit 21 boundaries and a six.

Karthik hit some delightful strokes square of the wicket before he was the ninth Tamil Nadu batsman to be dismissed as he was played on off Sumit Mathur’s delivery. It was a tired looking stroke as he didn’t move to pitch of the delivery and the ball took the inside edge as the off-stump went for a walk.

Tamil Nadu started the day badly as Rituraj Singh got K Vasudevadas (25) to flick one to square leg where Gajendra Singh took a catch. Then Karthik was joined by R Prasanna (44) and the duo added 76 runs before the latter was run-out.

The writing was on the wall but L Balaji (29) and J Kaushik (5) provided a bit support as 60 and 65 runs were added for the eighth and ninth wicket. Balaji however got an inside edge and was visibly unhappy with the decision.

For Rajasthan, Rituraj was the pick of the bowlers as he snared four for 76. He bowled in good areas and kept the pressure from one end although Karthik did hit some good shots off the bowler. The two veterans Pankaj Singh (2/58) and Mathur (2/53) also provided important breakthroughs.

In all counts, Balaji and the so called talented youngsters lacked character and plan to live up to their status.

Dependable batsmen like Vasudevadas and Prasanna, who had in the past helped the team recover from critical situations failed to put their hands up and be counted when it mattered most. On a pitch where patience was the key, none of the batsmen save Karthik were able to show the national selectors Mohinder Amarnath and Narendra Hirwani that they possessed virtue.(PTI)