With two full days to go, Vidarbha are ahead by 60 runs with six wickets in hand.

They have been outstanding with their chase during the knockout matches but the Ranji Trophy final would be a different ball game due to the slow and low wicket, says Saurashtra opener Harvik Desai, who believes a target of around 160 would be gettable.

Saurashtra chased 372 in the quarterfinal against Uttar Pradesh and knocked down a target of 279 against Karnataka in the semifinals.

With two full days to go, Vidarbha are ahead by 60 runs with six wickets in hand and Desai said bowling them out quickly would be key if they are to win their maiden Ranji Trophy title. (ALSO READ: Ranji Trophy final: Gritty Saurashtra battle hard to spice up final against Vidarbha)

“The wicket is slow and is offering spin. A target in the vicinity of 150-160 would be gettable. Yes we have chased bigger targets before but it would be different here because of the wicket. It’s difficult to score runs on this tricky wicket,” said Desai after end of third day’s play.

He said there was enthusiasm in the dressing room after the last wicket pair of captain Jaydev Unadkat and Chetan Sakariya added 60 runs to concede just a five-run lead.

“If we had a bigger lead to erase, it would have been a lot more difficult. Everyone was positive and raring to go for wickets in the last session. We are confident, we will do it,” he said. (ALSO READ: Ranji Trophy final: Aditya Sarwate reveals how he orchestrated Saurashtra veteran Cheteshwar Pujara s dismissal)

Vidarbha spinner Akshay Wakhare said there is no doubt that they have missed out on cashing in on the advantageous position.

“We could have taken a bigger lead but Jaydev (Unadkat) played well. We were attacking (Chetan) Sakaria more but he also got set and understood that staying at crease for long was possible on this wicket,” he said. (ALSO READ: Akshay Karnewar, Aditya Sarwate keep Vidarbha ahead)

“There was no help from the wicket. It is not only slow but it’s getting low too. The match is evenly poised.”

Asked why Rajneesh Gurbani was not used in the entire first session of three hours, Wakhare said, “We thought the spinners would do the job.” 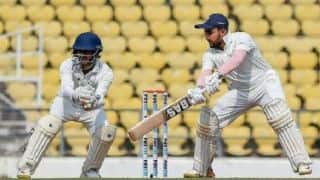 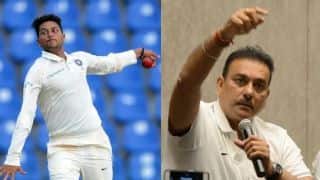