Day four will be a torrid time to be a batsman. But the day being Sunday the locals will throng because in Chennai they love their cricket and cricket always has a place for a miracle. The verdict will be out mid way into day four. 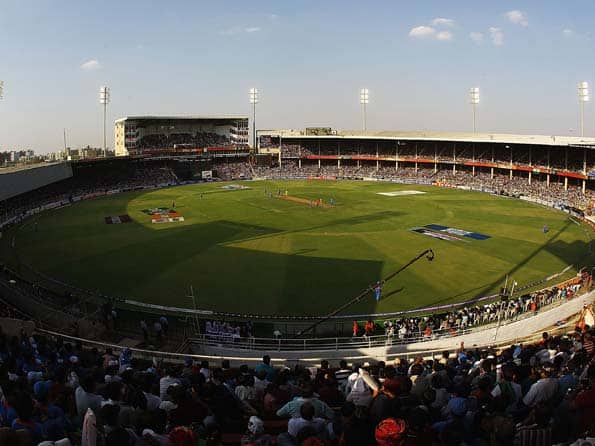 It was no hidden secret that Rajasthan would come out to bat on the third morning of the 2011-2012 Ranji Trophy final against Tamil Nadu with a clear intention to score briskly and cross the 600 runs mark with an improved run rate. Things went according to the plan in the morning session as they managed to stretch their overnight score for 404 for 2 to 506 for the loss of Robin Bist. However immediately after lunch Vineet Saxena who by then had spent 907 minutes at the crease for his 257 runs, the third longest innings in the history of first class cricket (Saxena’s knock in Ranji final third longest innings in first-class cricket),was bowled by left arm spinner Aushik Srinivas the best bowler of the innings who to his credit grabbed four wickets in the 85 marathon overs. Immediately it triggered a mini-collapse as against the run of play Puneet Yadav and Dishant Yagnik were back in the hut.

Just when it looked like Tamil Nadu would manage to pull things back Pankaj Singh and Rituraj Singh revolved around veteran Rashmi Ranjan Parida and used their muscle power to provide the much needed cushioning to Rajasthan s zone of safety. In the context of the game where slowness has dictated the proceedings Rituraj s 54 balls 45 turned out to be vital. Had he not been able to do that then the rate would not have crept up from an approximate 2.4 to 2.53 runs per over. In the 145th over of the match when the innings folded Rajasthan with a score of 621 had managed to claim the first major pole of this cat and mouse game.

Soon the news went around the ground that for Tamil Nadu to win the title they have to play out all of the remaining 205 overs and score at a bit better run rate than the visiting team. As the teams went for Tea the calculators came out in a flash and after various permutations and combinations the knowledgeable Chennai crowd set the number to aspire for at 521. Instantaneously the gallery s mood changed from that of five days game to that of a limited overs game.

Even the altered task was going to be a challenge on a pitch where the naked eye from a distance of 80 yards or thereabouts could see the ball rolling and at times stopping before coming to the bat. Also with the advantage of insight and just 25 overs to go before stumps on Day 3 the Rajasthan bowlers were immaculate as they stuck to a restrictive line and length. Rewards were not far away. First it was Abhinav Mukund and then it was Subramanium Badrinath Both playing in the wrong line of the delivery to be found out in front of the wicket.

In the first 8 overs Tamil Nadu could manage only 6 scoring shots and lost their best two batsmen. Soon it became 24 for 3 as the double minded Murali Vijay was caught at midwicket by Puneet Yadav off Rituraj.

Much to the delight of the local gathering Dinesh Karthik and Kuthethurshri Vasudevadas steadied the wrecked ship as Tamil Nadu ended the day at 66 runs with 7 wickets in hand. For Tamil Nadu to make a case the equation is simple. In the remaining 180 overs they need to score another 455 runs at a rate of 2.52 runs per over.

On the other hand Rajasthan bowlers will be fresh and raring to pounce upon the batsmen tomorrow morning. It is a matter of one or two wickets before Tamil Nadu capitulates for which Hrishikesh Kanitkar can afford to attack much beyond the first session. If he does not find success he has the luxurious option of opening up the field and going on the defensive. It will dry up the boundaries and force the batsmen to make errors and after that he can envisage a situation where Tamil Nadu is asked to follow on. This is the magic that runs on the board can do for a fielding team captain.

Tomorrow will be a torrid time to be a batsman. But the day being Sunday the locals will throng because in Chennai they love their cricket and cricket always has a place for a miracle. The verdict will be out mid way into day four.

Nathan Lyon keen to make a mark in Adelaide Test