Mumbai, for a change, need to win the game outright for the first time this season but it will be a tough ask against Saurashtra who are flying high after back-to-back victories.

Mumbai will miss the services of senior pacer Dhawal Kulkarni who has dropped out after being named in the squad to take on zonal rivals and table toppers Saurashtra in their Ranji Trophy Elite Group A game beginning from Saturday.

“He has dropped out. He practised yesterday, but I think he wasn’t 100 per cent. We will miss him in this match,” said Mumbai wicketkeeper-batsman Aditya Tare on the eve of the crucial game for the 41-time champions.

The hosts, struggling in the 13th position with eight points from five matches in the combined table of Groups A and B in comparision to Saurashtra who are on top, are not certain of the availability of batsman Eknath Kerkar, too, who has suffered an injury and underwent a fitness test.

“He had his test. We will check tomorrow again,” said Tare. “It is a crucial game for us. We have to win all our games starting from tomorrow. Our focus is on tomorrow’s match and we will try to get the best result that we can,” he said.

Mumbai, for a change, need to win the game outright for the first time this season but it will be a tough ask against Saurashtra who are flying high after back-to-back victories to lead the combined groups table with 25 points from six matches.

“We have our backs to the wall. And the only way out of this is going forward. We have to fight it out. We will look to play aggressive cricket. We will go on the front foot. Mentally we are prepared to play some positive and aggressive cricket. We have been in this situation in the past. Mumbai teams of past have been in this situation as well where they had to win all their games. So, we can draw inspiration from those teams and try to emulate same sort of success this time as well. We are pretty optimistic of our chances going forward,” he said.

Saurashtra skipper and left-arm pacer Jaydev Unadkat was also upbeat about his team’s chances. “The momentum is with us. We have got two outright wins in the last two matches. We are confident and are looking forward to this contest.

“Stepping up and taking on these challenges have been our strength this season,” said Unadkat who has taken over the reins mid-season from Jaydev Shah who retired after Saurashtra’s last game.

“As I have seen Bombay (Mumbai) in the past, they definitely look on the weaker side on paper, but they are playing at home. But yes, this is our best chance (to beat them),” he added.

Mumbai, who had beaten Saurashtra outright in their last two encounters, will once again bank on captain Siddesh Lad (530 runs) and attacking top order batsman Shreyas Iyer, with help from the allrounders like Shubham Ranjane and Shivam Dube (489 runs), to post a strong total.

But their depleted bowling, both in pace and spin, appears weak. Dube (17 wickets) has been Mumbai’s standout performer with the ball this season.

Saurashtra, without India players Cheteshwar Pujara and Ravindra Jadeja, will also miss the recently retired Shah who has topped the batting charts with 427 runs from five games.

In bowling, Dharmendra Jadeja has grabbed 32 wickets for Saurashtra so far with his left-arm spin and appears to be the main threat for Mumbai’s batsmen along with Unadkat (9 wickets) and another left-arm pacer Chetan Sakariya (13). 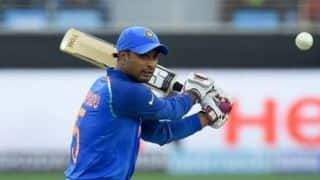