Ranji Trophy preview: Rajasthan will be wary of Haryana in semi-final clash

Ranji Trophy preview: Rajasthan will be wary of Haryana in semi-final clash

An intriguing battle is on cards when the bravehearts from Haryana square off against defending champions Rajasthan in the Ranji Trophy semi-final at the Bansi Lal Stadium. 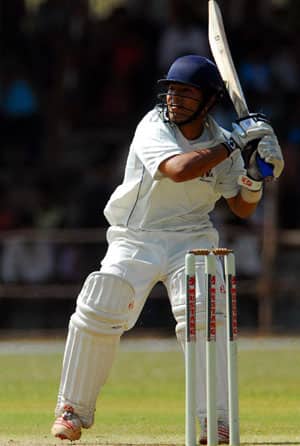 An intriguing battle is on cards when the bravehearts from Haryana square off against defending champions Rajasthan in the Ranji Trophy semi-final at the Bansi Lal Stadium.

While Rajasthan’s entry into the last four asserted the fact that winning the national championship last year was no flash in the pan, the little-known youngsters from Haryana have shown that intent and big heart can work wonders in crunch situations.

Strange as it may sound, the strip at the Bansi Lal Stadium has always been known for supporting the seamers and a patch of green in the 22-yard strip would certainly suggest that.

However, for both teams, there batting has been a source of strength. Much of Haryana’s success has been due to splendid batting by their opening duo of Rahul Dewan and Nitin Saini followed by their burly No. 3 Sunny Singh.

While Sunny has the best average among the trio, having scored 592 runs (253.81) this season, wicketkeeper-batsman Saini is the top-scorer with 603 runs while Dewan has 590 runs to his credit.

If Haryana have done well in the batting department, Rajasthan have been a notch better with the current top-scorer in the Ranji Trophy, Robin Bist, coming into this match with a whopping 841 runs at an average of over 105 to his credit.

The two ‘pros’ skipper Hrishikesh Kanitkar and veteran Aakash Chopra have also contributed 462 and 491 runs to their credit respectively.

Therefore, it can be safely concluded that the better bowling unit will have the edge.

On paper, the Rajasthan new-ball pair of Pankaj Singh and Sumit Mathur have loads of experience and can run through any opposition on a favourable track.

But one can’t count Haryana out especially after their only ‘pro’ Harshal Patel wrecked havoc in Bangalore where a star-studded Karnataka were shot out for 151.

As Kanitkar and Co. eye an encore, Mishra will hope to achieve what Kapil Dev and 10 others achieved against Mumbai back in 1991-92. (PTI)