On paper, the most well-contested quarterfinals should be between Saurashtra and Andhra in Ongole, Andhra Pradesh as both teams go into the knockouts from the elite cross pool.

The Ranji Trophy quarterfinals begin across four venues on Thursday with usual suspects such as Saurashtra and Karnataka taking on the lesser teams capable of springing a surprise.

On paper, the most well-contested quarterfinals should be between Saurashtra and Andhra in Ongole, Andhra Pradesh as both teams go into the knockouts from the elite cross pool.

Last year’s runners-up Saurashtra are expected to go past Andhra, having shown solid form in the league stage to finish with three wins, four draws and a loss from eight games. Their sole defeat came against Uttar Pradesh.

Seasoned pacer Jaydev Unadkat will be expected to fire once again, having taken 51 wickets this season at an average off 11.90, continuing his stellar form from last season.

In the batting department, Sheldon Jackson has stepped up in the absence of Cheteswar Pujara and is the leading scorer of the team with 605 runs at an average of 55.

Andhra go into the game after back-to-back losses towards the end of the league stage. However, their rampaging run in the first half of the season, when they were leading the table, helped them advance in the competition. They will rely a lot on in-form medium-pacer K V Sasikanth and batsman Ricky Bhui in the must-win game.

In Jammu, the mighty Karnataka take on the spirited bunch of J&K players who qualified despite a chaotic build-up in the wake of the communication clampdown in their state.

Karnataka, who finished third in the elite pool behind Gujarat and Bengal, scripted important wins over Tamil Nadu and Mumbai. They delivered when it mattered most, having won two of their last three games.

They play Group C toppers J&K, who lost only to Haryana in the league stage. Captain Parvez Rasool has led from the front scoring 403 runs at 44.77 and 25 wickets at 14.56. Another player who has contributed massively to the success of the team is batsman Abdul Samad who has amassed 547 runs.

In Cuttack, a comfortable win is expected from Bengal against Odisha. Their confidence must be sky-high following memorable victories over Rajasthan and Punjab in the last two games. They chased down 320 against Rajasthan before beating Punjab in a low-scoring game on a difficult track in Patiala.

The seasoned Manoj Tiwary has been their go-to batsman and left-arm spinner Shahbah Ahmed their stand out bowler.

At the Sardar Patel Stadium in Valsad, hosts Gujarat would be overwhelming favourites against Goa who advanced from plate group having suffered relegation last year.

Gujarat made it to the last eight after topping the elite cross pool with five wins from eight matches and three draws.

Goa will have their hopes pinned on their leading run-scorer Amit Verma (791 runs) and S K Patel (751 runs) and would want them to play another crucial knock in the marquee clash. But the quarterfinal will be a different ball game as they face a formidable Gujarat attack led by Roosh Kalaria, who has taken 30 wickets so far. 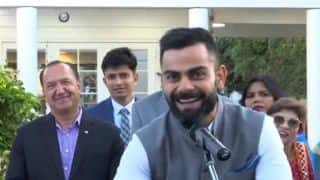