Sandeep Lamichhane has been making impression with eye-catching performances in T20 leagues across the globe.

Nepal’s spin bowling prodigy Sandeep Lamichhane is making impression with eye-catching performances in T20 leagues across the globe. More recently, he was part of the Big Bash League’s Melbourne Stars for which he took eight wickets in four appearances.

He left the league midway to link up with Sylhet Sixers of Bangladesh Premier League (BPL) to fulfil an earlier commitment. The 18-year-old began as a medium-pacer before switching to legspin bowling at an early age.

Rashid Khan has been making waves with his legspin bowling for some time now and Lamichhane believes the Afghanistan bowler is having an impact through his pace and variation.

“Yes. He [Rashid] has definitely had an impact on the current generation,” Lamichhane told Cricbuzz. “I think it depends on the generation because cricket in 2003 was different to cricket in 2019. Because there were very few batsmen who played the sweep shot. So you could bowl around the batsman’s leg. Everyone sweeps these days and you have to be very careful and mix it up with a bit of pace. It’s a great challenge. But I think Rashid brought a big change in the legspin era. And yes, lot of young stars are following him. So he should be proud of himself.”

Lamichhane has also played in the cash-rich Indian Premier League (IPL) where for the erstwhile Delhi Daredevils (now Delhi Capitals), he picked up five wickets in three matches last season.

Recounting his experience with the franchise, Lamichhane said, ” Never played any T20 tournament [of that stature] before that, never played in single T20 match before that. It was a proud moment for me, for Nepal. It was like a guy from Nepal making his country proud, going outside and playing on the big stage like IPL. And I got my chance in the last three games and performed well over there. It was tremendous.” 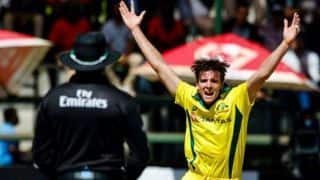