With weeks to go for the IPL, Khan was showcasing some of the new shots he has added to his arsenal. From picking wickets to wielding the willow, Afghanistan allrounder Rashid Khan is a special cricketer, no doubt. He is also a popular figure in India, where he plays the Indian Premier League (IPL) Ffor the SunRisers Hyderabad franchise. With weeks to go for the IPL, Khan was showcasing some of the new shots he has added to his arsenal.

He shared a video on his Twitter handle where he can be seen playing a helicopter shot to an overpitched ball outside the off-stump. The bat twirled in his hands which took the ball over the third man for a six. It was not intended to go there but eventually ended up there.

It is not a conventional cricket shot.

Do you call it helicopter?? I think soo, Rashid captioned his video.

Do you call it helicopter?? I think soo 🤔🤔🚁 pic.twitter.com/DXYL15TSS1

At the auctions, SRH brought India’s Under 19 captain Priyam Garg and also acquired the services of Fabian Allen and Shaun Marsh.

Rashid, who has a T20 batting strike rate of 148.62, has even scored a half-century in the format.

SRH will play their IPL opener against Mumbai Indians on April 1 at the Rajiv Gandhi International Stadium. 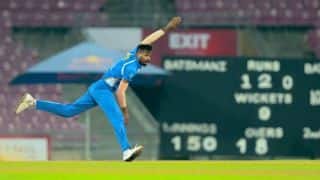