Ravi Shastri's assessment of people in India being happy with their team's defeats is not relatable.

Ravi Shastri slammed critics who seldom credit the team for good efforts and prefer to harp on the weaknesses in failure. The Indian coach lauded the efforts of his side, who won 8 out of the 12 matches in the South African tour, returning with the ODI and T20I trophies. “What I am very proud about is that the boys fought on each of the 21 days of cricket there which is unreal for an Indian team on any tour for that matter,” Shastri told mid-day.

India won the ODIs 5-1 and T20Is 2-1 against a South African side that were ranked No. 1 in ODIs before the series and had won 17 consecutive ODIs at home. However, injuries to key players like AB de Villiers, Faf du Plessis and Quinton de Kock had derailed their fortunes against a very good Indian side.

When asked about the strength of the opposition, Shastri shot back: “This is the biggest problem with our critics. When you win, the other team is not playing well. When you win in Sri Lanka, they are a weak team. When you play South Africa, they are not at their best.

“By the way, we are not playing players, we are playing a country so I don’t care what is on offer. I am playing against South Africa. Who plays for South Africa is not my problem.”

India conceded the Test series at Centurion by going down 0-2. The team received criticism, especially on lines of team selection. Ajinkya Rahane and Bhuvneshwar Kumar were not a part of the XI and the team management received flak for the decision.

Shastri, who has backed those decisions, expressed his disappointment over the criticism and spoke on how the side prepared for the famous Johannesburg Test that was played on a difficult track: “We always believed we could win. Very few people saw it, but we could have won both those games. Sometimes you feel in your country, people are happy when you lose. We pulled out a calculation where we looked at sessions and we were just two sessions behind and those cost us two Test matches. I said, take the positives out of that and go into the next Test match to win not to draw to win! Not many teams would have batted first on that track. It was a nasty one.”

India excelled in testing conditions to notch up a remarkable win at The Wanderers, where they gained the winning momentum.

Shastri also refused to compare this side to the teams of past and expressed his mantra: “We make it very clear ‘read nothing, hear nothing… focus on your work ethic and the rest will follow. Winning and losing is not in your hands, your work ethic and preparations are”‘.

The biggest stakeholders in Indian cricket are the fans. It was only at the turn of the century when India began to play consistently overseas. Again, the side saw a slump post 2011 when India suffered frequent batterings in challenging conditions in Australia, England, New Zealand and South Africa. Fans can go overboard with emotions and reactions bus isn’t it a part of being a professional sportsperson to accept the scene as it is?

The media can go overboard as well, at times a bit too much with criticism but often there are constructive ones as well. Aren’t the ones covering the sport allowed an opinion, especially when in-form cricketers are dropped or cricketers who fail continuously in certain situations are backed and persisted with?

The ones dismissing the Indian win against a weak opposition are wrong. The comparisons often stem from the comparisons Shastri had made in the past. He was reminded of the weak Sri Lankan side only when he boasted of India’s current achievements over there in comparison to the past sides.

The media and the fans had stood firm behind the side during difficult phases (Sydneygate invariably comes to mind). Shastri’s assessment of people in India being happy with their team’s defeats is not relatable. 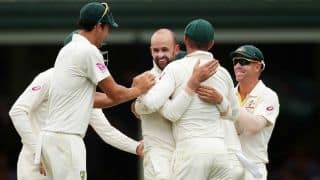