Ravichandran Ashwin in No. 10 of ICC ODI bowlers rankings

Ravichandran Ashwin in No. 10 of ICC ODI bowlers rankings

In the batting chart, Virat Kohli tops the Indian player's list at the fourth position.

Dubai: Indian off-spinner Ravichandran Ashwin has jumped two places to the 10th position in the ICC bowler’s rankings issued on Thursday. Ashwin, who bagged six wickets in the three One-Day Internationals (ODIs) against Bangladesh, was India’s leading wicket-taker in the just-concluded three-match series againsr Bangladesh and is also the only Indian to feature in the top-10 list.

But Ashwin stayed well behind young Bangladesh left-arm pacer Mustafizur Rahman (13 scalps in 3 matches), who got an 88th rank in the chart led by Australia’s Mitchell Starc. Bengal medium-pacer Mohammed Shami, who missed the series, which was India’s first bilateral loss to Bangaldesh (1-2), due to injury is the only other Indian bowler in the top-20 list at the 12th position.

In the batting chart, Virat Kohli tops the Indian player’s list at the fourth position as opener Shikhar Dhawan, who was the leading run-getter in the series with an accumulated score of 158, dropped a place to seventh. Dhawan still stays well clear of skipper Mahendra Singh Dhoni, who occupies the eight spot in the table led by South Africa’s AB de Villiers. Suresh Raina has also improved his ranking by two places to 18th. 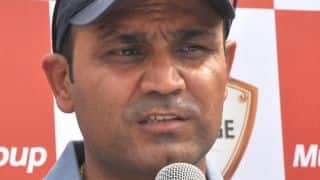