Taking a cheeky dig at Brad Hodge over his subsequent apology to Virat Kohli, Ravichandran Ashwin said "March 30 will be remembered as 'World Apology Day'.

New Delhi: Taking a cheeky dig at former Australian batsman Brad Hodge over his nasty comments and subsequent apology to Indian skipper Virat Kohli, star off-spinner Ravichandran Ashwin said “March 30 will be remembered as ‘World Apology Day’. Hodge received a flurry of criticism for his suggestions that an injured Kohli had pulled out of the fourth and the final Test against Australia in Dharamsala to save himself from the tenth edition of the Indian Premier League (IPL). Hodge had said that if it was not a serious injury, then the Indian captain should have played the Dharamsala Test, especially knowing that the four-match series was deadlocked at 1-1. FULL CRICKET SCORECARD: India vs Australia, 4th Test at Dharamsala

However, Hodge soon realized that he might have erred in his judgment with regard to Kohli’s shoulder injury and posted a heartfelt apology to the Indian captain and passionate cricket fans on his Twitter account. The former Australian batsman, who will again coach the Gujarat Lions in the upcoming edition of the IPL, said that his intentions were never to harm, criticize or be derogatory towards anyone. Looking at the obvious turn of events, India’s ace all-rounder Ashwin couldn’t help but look at the funny side of it. “On a lighter note, from this year onwards, 30th March will be remembered as World Apology Day,” Ashwin wrote on Twitter.

On a lighter note, from this year onwards 30th march will be remembered as world apology day.

Kohli, who is still recovering from a right shoulder injury he sustained while putting in a dive on the first day of the drawn third Test in Ranchi, is facing a battle to be fit for the start of the IPL, beginning April 5. After India reclaimed the Border-Gavaskar series 2-1 following an eight-wicket win against the Steve Smith-led side in Dharamsala, Kohli revealed that he needs few more weeks to be back in action. 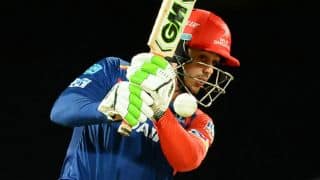