Ravindra Jadeja admitted that he's "lucky that a lot of things fell in place" which helped him produce an impressive performance against South Africa.

New Delhi: On an impressive comeback trail with 21 wickets, Ravindra Jadeja admitted that he’s “lucky that a lot of things fell in place” which helped him produce an impressive performance against South Africa in the ongoing Test series. Asked if the timing of his Ranji Trophy exploits (34 wickets in 3 matches) and subsequent Test performance might bring him back in contention for the limited overs format, Jadeja sounded positive. “Yes, you can say that. When I was dropped from the team, I think in June-July, I was out for nearly six months. At the start of the Ranji Trophy seasons, I got three matches in Rajkot and luck also favoured us with the wickets offering turn,” Jadeja, who returned with figures of 5/30 in South Africa’s meager first innings score of 121 in the fourth and final Test, said. FULL CRICKET SCORECARD: India vs South Africa 2015, 4th Test at Delhi

“No doubt, I worked hard at the ground but a lot of things were timed to perfection. Ranji Trophy started with SA series being round the corner. So it all fell in place for me,” Jadeja said. He expressed happiness that no one can term the Feroz Shah Kotla track as a turner. “It’s good that everyone is doing well. Now you can’t call this a turner. We are playing two spinners and they are also playing two spinners. Moreover, they are employing four spinners while we are using only two, I don’t think there’s anything special in the wicket,” said Jadeja. Harbhajan Singh backs practice of ‘home advantage’ amidst Nagpur pitch controversy

“It’s just that we batted well in first innings and they did not as a result of which, we got a lead of 213 runs. As the game progresses, the wicket will get worse, so we are n a good position. Now we need to get them out in second innings. I think this is a far better wicket than the one at Nagpur,” he said. Jadeja is also happy that all the spinners are complementing each other well. Virat Kohli, Ajinkya Rahane put India in commanding position vs South Africa in 4th Test at Delhi

“I have not done anything special. I bowled just like I do in Ranji Trophy. All of us, Ashwin, myself and Mishy bhai [Amit Mishra], have complemented each other. I need to prove myself in whatever matches I play for India,” he said. Jadeja said that after being dropped, negativity had crept in him for some time. “There was a lot of negativity that crept inside me and I felt I needed to get rid of that. Now with my performances, I hope to do well in coming matches also. I told you guys in Mohali that for three months, I have not even thought about cricket. I was concentrating on personal life. I was doing horse riding and I was not talking about any cricketing matters with anyone nor was I encouraging any such discussion. Three months, I took complete off,” he said.

He is also enjoying bowling in tandem with off-spinner Ravichandran Ashwin. “Obviously, feeling good that both me and Ashwin are bowling well in tandem. We have played a lot together and we interact a lot during net sessions. Since we are now doing well, just like we performed in the 2013 Australia home series. We understand each others’ strengths and weaknesses. He keeps on telling me about my weak areas and how I can improve.”

For Jadeja, it is important that he contributes with the bat and having done that gives him a lot of satisfaction. “Whenever I go into bat, it’s always six down. So whichever batsman is batting, my aim is to bat as long as possible. Luckily, all three matches, whoever was playing, I had partnerships and team’s position in the match improved,” Jadeja said. He said that there were no instructions given to the batsmen today, not something that he is aware of.

“No instructions were given but I have no clue as to what decision captain or Ravi bhai [Shastri] took. I know one thing. We need to bat well so that when South Africa’s second innings comes, we should be in such a strong position that even if they have a partnership, we can bowl freely.” Jadeja thanked Sutanshu Kotak, a former dogged left-hander from Saurashtra and now the senior team’s coach for helping him during testing times.

“When Ranji Trophy camp started in Rajkot, I spoke to our coach Sitanshu Kotak what to do. He also did some planning for me, we interacted a lot as he knows me from my U-14 days. He knows my strengths and which areas I should work. Rajkot’s home advantage also worked. Sitanshu knows me for 12 years and I have played first-class cricket with him for 7 years. We have been room partners. He tells me everything, from what I must be thinking after having reached a certain score and what entails me to hit a certain kind of shot at that juncture. Subtle things that needs to be done,” Jadeja said.

Asked as to how one can bat on the sub-continental tracks offering more turn, he said it should be a blend of attack as well as defence. “It should be a mix of everything. If you are facing 10 balls, one is bound to turn, one will keep low, something or the other will happen. If you are thinking of defending for 10-15 overs, then it’s not a good idea, as it means you are playing for one and half hours and then getting out without doing much. I think you should be able to attack the loose deliveries,” said Jadeja. 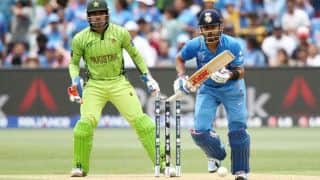