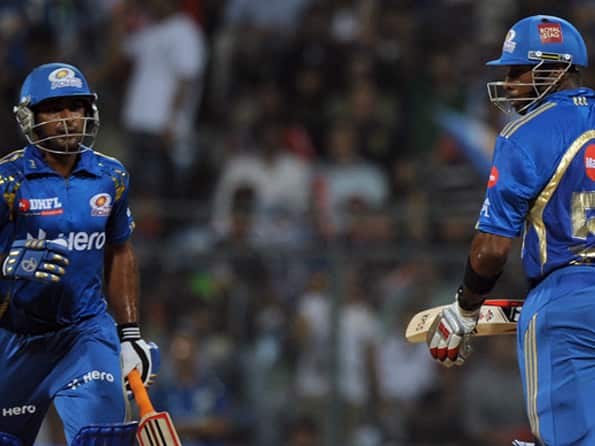 In a nail-biting finish, Mumbai Indians beat the Royal Challengers Bangalore by five wickets at the M.Chinnaswamy Stadium in Bangalore. With the victory, Mumbai have moved to the second position in the points table.

With this win, Mumbai rose to second position in the IPL Points Table

Earlier, Mayank Agarwal’s brilliant 64 off 30 balls ensured that Royal Challengers Bangalore scored a formidable 171 for six in their allotted 20 overs. At one stage, Mumbai were in a hopeless position at 51 for 5, when Kieron Pollard and Ambati Rayudu got together.

Bangalore got off to a brilliant start as Zaheer Khan dismissed Sachin Tendulkar for a duck in the first over. Mumbai s hopes of an encore of Herschelle Gibbs-Rohit Sharma partnership were shattered when the South African ran himself out in the second over with the score at four for two. Rohit was then dismissed for five in the fourth over with the score reading 19 for three.

Dinesh Karthik fought for a brief while until Muttiah Muralitharan had him caught at the fine leg boundary for 16. Dwayne Smith soon followed in the next over as he was caught by Tillakaratne Dilshan off the bowling of Harshal Patel.

Rayudu and Pollard started constructing a fighting partnership and revived hopes of a Mumbai victory. The match was interrupted for sometime as one of the light towers at the M.Chinnaswamy Stadium went off.

Pollard smashed KP Apanna for two sixes in the 11th over and Rayudu followed it up with a six and a four in the 13thbowled by Gayle.

In the last four overs Mumbai needed 57 for a win with Rayudu and Pollard holding fort. Zaheer bowled the seventeenth over and went for 16 as the Mumbai duo started upping the ante. In the next over, which was bowled by Vinay Kumar, Rayudu smashed two sixes and a boundary to turn the equation in favour of Mumbai.

With 23 required off two overs, Mumbai were the favourites. Pollard and Rayudu completed their 100 run partnership when the West Indian edged Zaheer for a four in the 19th over.

Mumbai required 14 off the last over and Bangalore handed the responsibility to Gayle to bowl it. Pollard flicked Gayle for a six over mid wicket and clinched victory with two fours. Ultimatrely, the partnership put up 122 on the board.