RCA lodges complaints against Warne for publicly abusing its secretary

RCA lodges complaints against Warne for publicly abusing its secretary

Rajasthan Royals captain Shane Warne has landed in trouble as the state's Cricket Association (RCA) has lodged a complaint against him with the BCCI and the IPL for publicly abusing its secretary Sanjay Dixit for not acceding to his request of a suitable pitch. 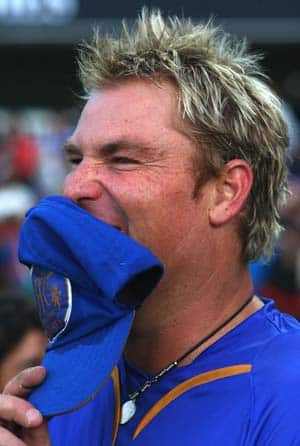 Rajasthan Royals captain Shane Warne has landed in trouble as the state’s Cricket Association (RCA) has lodged a complaint against him with the BCCI and the IPL for publicly abusing its secretary Sanjay Dixit for not acceding to his request of a suitable pitch.

The RCA has alleged that Warne, who has already announced his retirement from IPL as a player, misbehaved with Dixit for not acceding to his demand after Rajasthan Royals slumped to a humiliating nine-wicket defeat against Royals Challengers Bangalore in their last home match on Wednesday night.

RCA venue director Narendra Joshi has written to IPL’s chief operating officer Sunder Raman, alleging that Warne had publicly abused Dixit by calling him “a liar and egoistic” and demanded action against the Australian.

Sources allegedly that a disappointed Warne walked up to Dixit and abused him for not replying to his messages. He called Dixit a liar, egoistic and asked him to go away, forcing Rajasthan Royals owner Shilpa Shetty to intervene and apologise for the incident.

RCA secretary Dixit also filed a separate complaint and had urged the BCCI and IPL to take stern action against Warne for pressuring him to provide a suitable wicket for Rajasthan Royals’ home matches.

According to the sources, Dixit has forwarded the text messages to BCCI which Warne had repeatedly sent him.

When Dixit was asked about the incident, he said Warne’s behaviour probably came out of frustration for the team’s back-to-back defeats, which almost jeopardised Rajasthan Royals’ chances of making it to the play-offs.

“The BCCI has already clarified that the pitch comes under the purview of the pitch committee and curator. So, how could I have acceded to his demand? he questioned.

“His behaviour was totally unjustified and I have asked for action against him. Shilpa Shetty was gracious to come and calm things down,” Dixit added.

The back-to-back defeats at home against Chennai Super Kings and RCB had made Warne furious as he believed that the change of pitch after Sachin Tendulkar’s criticism last month following Mumbai Indians’ seven-wicket loss had robbed Rajasthan Royals of the home advantage.

Rajasthan Royals were banking on low and slow home conditions to come good in the tournament but after Tendulkar’s remark, the BCCI had rushed off its Grounds and Wickets Committee chairman, Venkat Sundaram to Jaipur to prepare a new strip for the remaining IPL matches at the ground.