New Delhi: Karnataka left-arm pacer Sreenath Arvind has replaced injured Adam Milne in the Royal Challengers Bangalore (RCB) squad for the ongoing Indian Premier League (IPL) 2015. The IPL Technical Committee approved the replacement after the New Zealand pacer was ruled out of season 8 due to a foot injury that the pacer picked during the ICC Cricket World Cup 2015.

The Technical Committee of the IPL consists of Anurag Thakur (Hony. Secretary, BCCI), Sourav Dasgupta, Subir Ganguly, Sourav Ganguly and Ravi Shastri. This will be Arvind’s second stint with RCB. The paceman was part of the RCB squad in the 2011 and 2012 seasons of the competition. He was the highest wicket-taker for the Vijay Mallya-owned side in the 2011 edition, with 21 wickets from 13 games.

The Royal Challengers Bangalore have played three games so far and have only managed a single victory so far. Their bowling has been below par and the services of Mitchell Starc and Milne have been missed heavily. They’ll hope that Arvind can make an impact. 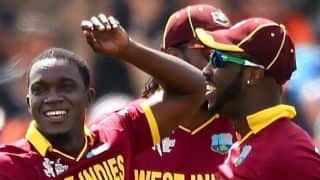