There were no squash balls inside the man s gloves this time. However, records were still broken left, right and centre. In the end, Adam Gilchrist got a century, Shaun Marsh nearly got his, and the two were involved in the highest ever partnership for the any wicket in all T20 games included. 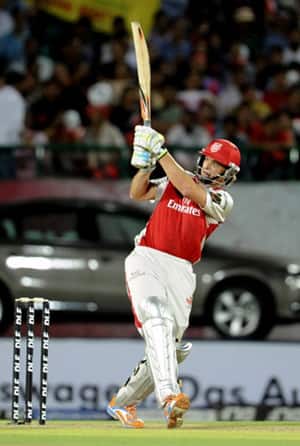 There were no squash balls inside the man s gloves this time. However, records were still broken left, right and centre. In the end, Adam Gilchrist got a century, Shaun Marsh nearly got his, and the two were involved in the highest ever partnership for the any wicket in all T20 games included.

Kings XI Punjab scored 232 for two after struggling through to 30 at the end of the sixth over.

Gilchrist had gone into this game with 226 runs under his belt from 12 games at an avoidable average and having contributed almost nothing with the bat.

It took time, but the lost timing was found tonight.

It started off slowly for Gilchrist, much of it because he did not get too much strike. At the end of the Powerplay overs, he had faced only eight balls and got a couple of singles off them. Punjab had got to 30 for the loss of Paul Valthaty s wicket and the decision to bat first seemed to be backfiring.

Then, almost on cue, the relaxing of the fielding restrictions seemed to have fuelled the Gilchrist appetite. It was the start of an extravagant innings from Gilchrist that had a mark of the Gilchrist of old written all over it.

Abhimanyu Mithun was the first to be carted to the mid-wicket boundary for a six and there was no looking back after that. Sreenath Aravind was hit over the mid-off and the over the bowler s head for a six and a four, before Shaun Marsh joined in the merry-making with another set of a six and a four in the same over.

Chris Gayle, who had bowled an over in the Powerplay earlier and conceded three, was afforded the bitter taste of his own medicine when Gilchrist powered him for two more over the fence but the most special treatment was reserved for Charl Langeveldt.

One slower one from Langevedlt was picked up so well by Gilchrist that it was almost hit into the hills on the side a good 122 meters from the bat. The battering seemed to have put a spanner in the bowling and he went for another couple of sixes off the next two balls. 30 for one after six overs had been magically turned into 99 off 10.

Kohli did try himself with the ball but conceded 14 and after the side consolidated with 18 off the next two overs, the mayhem resumed.

van der Wath, who had come into the side in place of Zaheer Khan, had conceded only nine runs in his first two overs. With the Punjab score on 143 for one after 14, it only seemed appropriate to get in a frontline pace bowler to try and peg one or two batsmen back.

Instead, van der Wath was plundered in much the same fashion as every Punjab bowler was, by Gayle in their previous match-up. Marsh was the batsman this time.

The first two went over long-off and deep mid-wicket for two sixes before it was followed by three glorious boundaries that would have made the purists marvel. The over was rounded off with a six off the last ball Marsh had hit 30 off it to make it the second costliest over of the tournament.

The century for Gilchrist came in the last over of the innings off 53 deliveries by which time he had ravaged nine sixes and seven boundaries and propelled Punjab to invincibility. Gilchrist was finally dismissed off the penultimate ball of the innings, but by then, the pair had added 206 runs off 16 overs and Marsh remained unbeaten on 79.

Law of averages is term that is often associated with sports and it was on full display tonight. What Bangalore would hope is that it does not apply in case of Gayle, whose batting has shattered a whole lot of records this IPL. Without a typically brash effort at the top from Gayle, the seven-game streak could be halted here.