New Zealand skipper Brendon McCullum and opener Hamish Rutherford scored quick-fire half centuries while Ross Taylor played a cameo towards the end to guide the visitors to 201 for four against England in the first Twenty20 match at The Oval in London. 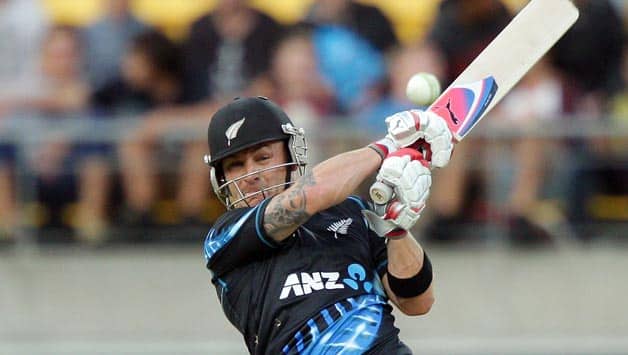 New Zealand skipper Brendon McCullum (68) and opener Hamish Rutherford (62) scored quick-fire half centuries while Ross Taylor (32 not out) played a cameo towards the end to guide the visitors to 201 for four against England in the first Twenty20 match at The Oval in London.

Winning the toss and electing to field, England captain Eoin Morgan threw the ball to debutant Boyd Rankin who struck in his first over. Rankin sent back opener James Franklin off his fourth delivery when an inside edge carried safely into the hands of wicketkeeper Jos Buttler.

Skipper McCullum joined Rutherford and the duo got into the act in the very second over. Despite the early wicket, New Zealand showed clear intentions of taking the attack to the opposition when they slammed Chris Woakes for 19 runs in his only over of the match. They kept the run rate around 10 runs an over as they took apart England’s bowlers. They managed to reach 54 for one at the end of the six-over powerplay after which Morgan brought James Tredwell into the attack.

The change in the field did not make an iota of difference to the two batsmen. Rutherford welcomed the spinner with two consecutive sixes in his first over to keep the momentum going.

A couple of overs later, Rutherford hit Tredwell for a boundary to bring up his half-century off just 28 deliveries.

Morgan then brought Luke Wright into the attack who struck to remove Rutherford. The Kiwi opener departed for a well-made 62 off just 35 deliveries, an innings that was laced with six fours and four sixes. This ended the 114-run stand from just 67 deliveries between McCullum and Rutherford for the third wicket.

McCullum however, continued and reached his half-century. He was joined by Ross Taylor who supported him well to keep the scoreboard ticking. This pair added 46 from just 24 deliveries before Wright bagged his second wicket by cleaning up the Kiwi captain. McCullum’s blazing innings came to an end on 68 from just 48 balls. At this stage, New Zealand were at 161 for three in the 16th over.

Taylor’s cameo towards the end took New Zealand to a commanding total of 201 for four.