Richard Pybus had left the post of Bangladesh head coach in 2012.

Bangladesh are in a dazed state currently after Chandika Hathurushingha resigned from the post of head coach role. Although there are reports of former Bangladesh captain Khaled Mahmud likely to step in as interim coach, no official statement has been released by Bangladesh Cricket Board (BCB) yet.

Amidst all this, Richard Pybus is back into the Bangladesh camp. Pybus had left the head coach role in 2012 on the basis of personal commitments and board interference. While resigning his statement to ESPNcricinfo was, The board, in the form of Nizamuddin Chowdhury the chief executive, approached me earlier this year on three occasions to become head coach. I turned them down twice, as I couldn’t commit to the amount of time they wanted me to be with the team and in Bangladesh, which was 320 days a year. I explained that I had family responsibilities that stop me from being away for this amount of time.

Pybus had also accused the board for releasing his contract details to the public.

Before he could make a comeback to the Bangladesh squad, Pybus would have to provide explanations for the comments he made against them 5 years ago. BCB has gone through Pybus presentation that focused on what he would want to for Bangladesh in the future.

BCB President Nazmul Hassan gave a hint on when the next coach will be revealed and Pybus reapplication.

On Pybus returning to Bangladesh camp

Of course we had [his resignation from Bangladesh] in mind. We asked him plenty of questions about it. But it is better we don’t talk about the previous board. He is saying the same things [about the board]. I asked him, then why do you want to come now? He had his answer, but I don’t think we need to talk about it.

On the appointment of next coach

It is hard to say whether we are going to appoint a coach before the Sri Lanka series [in January 2018] but we are trying to get someone soon. Simmons will arrive on December 9 while another coach is also supposed to arrive within this time. We won’t reveal his name. We want to take a decision on our December 10 meeting. 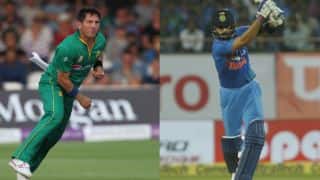