Since his retirement in 1964, Benaud started his career in Media and broadcasting.

Sydney: Richie Benaud holds a revered place in international cricket, lauded as a “national treasure” and the most influential Australian cricketer and broadcaster of his era. The Test great and pioneering broadcaster died in his sleep Friday at the age of 84 after fighting skin cancer and the debilitating effects of a car accident near his Sydney seaside home in 2013.

“Our country has lost a national treasure,” mourned Cricket Australia chairman Wally Edwards. After Don Bradman, there has been no Australian player more famous or more influential than Richie Benaud.”

Benaud, who was made an Officer of the Order of the British Empire (OBE) in 1961 for services to cricket, led Australia in 28 of his 63 Tests and did not lose a series as captain. His adventurous leadership was encapsulated by the famous tied Test with the West Indies in Brisbane in 1960.

Australia were chasing 233 with 320 minutes of play left, and Benaud’s instinct was to go for an improbable win. He came in to bat at a perilous 92 for six and hit a rollicking 52, as Australia counter-attacked until a run-out on the last ball left the scores tied.

The dashing leg-spinning all-rounder epitomised his cricket by playing with his shirt unbuttoned to his chest and his collar upturned. Benaud said recently he was paying the price for a cricket career in which he did not wear a hat or sunscreen against the often fierce sun.

“When I was a kid we never ever wore a cap. I wish I had. You live and learn as you go along,” he said. “I recommend to everyone they wear protection on their heads. Eighty-four-year-olds don’t seem to mend as well as they used to.”

The first man to complete the double of 2,000 runs and 200 wickets in Test cricket, Benaud combined sport with life as a journalist for The Sun and the News of the World from 1956 until his retirement as a player in 1964.

He learned reporting on the police beat and began his broadcasting career on BBC Radio in 1960, moving to BBC Television three years later. He also had a stint on Britain’s Channel 4.

Benaud said of his laconic commentating style: “The key thing was to learn the value of economy with words and to never insult the viewer by telling them what they can already see.”

He memorably featured in a series of television advertisements for the Australian Tourism Commission in 2004. The commercial showed him in a range of scenic locations saying his cricketing catchphrase, “Marvellous”.

The much-mimicked Benaud was renowned for appearing before the TV cameras adorned in his beige jacket and he never took umbrage at his many impersonators.

“I never talk about that. The only objection I have is if someone uses my name or image and tries to sell something,” was Benaud’s response when asked about the satirists.

After retiring from playing Benaud divided his time between the summer cricket seasons of Britain and Australia, working in television and writing books and for newspapers.

Overall Benaud played in or commentated on approximately 500 Test matches, as he noted in one of his final interviews in Britain. Through his work in England and commentary for commercial television in Australia, he became the iconic voice of the Channel Nine team from the first summer of media baron Kerry Packer’s trailblazing World Series Cricket in 1977–78.

He retired from international commentary after the 2005 Ashes series, partly as a protest against the game’s disappearance from free-to-air TV in Britain. Benaud remained a mainstay in Nine’s cricket coverage until the 2013 car accident sidelined him, before he announced in November last year that he was fighting skin cancer.

It was Benaud’s distinctive voice that provided a moving tribute to Test cricketer Phillip Hughes, who died when struck by a bouncer last November. Benaud finished his narration with a poignant “forever, rest in peace, son”. 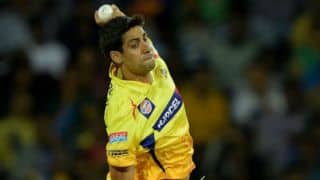 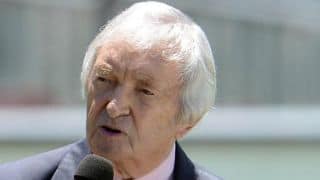