The two-time World Champions were handed a crushing nine-wicket loss.

Sydney: West Indies team manager Richie Richardson has said he is not worried about his side’s dismal form in their defeat to England in a warm-up fixture Monday, insisting he didn’t want the team “to peak too early” for the World Cup.

The two-time World Champions were handed a crushing nine-wicket loss by England at the Sydney Cricket Ground (SCG) here. They got off to a terrible start, being reduced to 67/6 inside 18 overs, and never recovered from the setback with none of their batsmen failing to register even a half century.

“It wasn’t a very good start. But it’s not about the start, it’s about the finish. We don’t want to peak too early,” Richardson was quoted as saying by ESPNcricinfo.

The former Windies captain said that the manner of the defeat didn’t reflect the true capability of the team.

“This performance tonight is no reflection of how we’ve been training or anything about the mood in the camp. We have worked really hard. It is just very strange that England got the better of us. It’s just one of those things. We have prepared well,” he added.

But the former right-handed batsman said the performance left a lot to be desired from the team. However, they are determined to address the performance and rectify their mistakes.

“Of course, we are unhappy with the performance. So we will review, we will reassess and we will come back. But if you had seen us training, you would have seen a bunch of really happy guys, who are training hard and did everything they had to do. So this performance came as a shock. I don’t have explanations because I didn’t expect it,” he said. 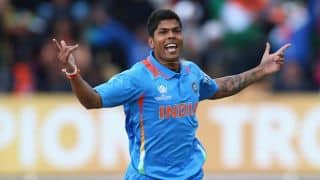